Dorigo Sempere made the product to showcase the qualities and ingredients of algae paper.

Titled From Venice with Algae, the stamp project takes its name from a play on the well-known saying "from Paris with love", which comes from the name of a 2010 action film.

The designer hopes that, by using the paper method to make stamps, the innovative and eco-friendly material will be sent to and seen by people all across the world.

"Stamps are very interesting objects in themselves, since they have always represented historical moments, but also show a high level of technology," Dorigo Sempere told Dezeen.

"If we go into collectibles, stamps are the objects that achieve the highest weight-to-value ratio in the world," he continued.

"The stamp has the extraordinary power to travel all over the world and to tell a story."

"Being in the environmental situation in which we are, I realised that working with paper in a sustainable way can be as necessary as working with any other typical everyday object."

Favini started making its Shiro Alga Paper when the Italian government asked the company to find a technique to make use of the build-up of algae that was harming the ecosystem in Venice's canals. As well as enhancing the marine life, it is beneficial because it makes paper without using trees.

The company extracts and dries the algae, before grinding it down in a special mill and combining it with paper pulp.

In a bid to better understand the Shiro paper's materiality, Dorigo Sempere learnt to make the paper from scratch with the raw ingredients, including thin powdered algae, coarse powdered algae and cellulose fibres.

Dorigo Sempere organises the production of paper into three phases: preparing the pulp into fibres, forming the paper on a wire-mesh mould, and finally drying and finishing the paper's surface.

The first step in the process is to hang the cellulose fibres in clear water for 24 hours, allowing them to macerate.

These fibres are then moved into a container and mixed with the thin and coarse powdered algae in different amounts, depending on the desired colour and texture of the final result.

The thicker the powdered algae, the more irregular and rough the surface texture and the darker the colour of the paper. It can range in colour from ivory to dark brown. 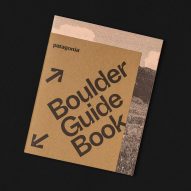 More or less visible grain can also be achieved depending on the composition of the mixture.

A deckle – a frame-like device used to shape the pulp – is then dipped into the container and used to scoop up the fibres, before leaving them to dry under a press for 48 hours.

The thickness of the paper can be determined by altering the depth at which the frame is immersed in the mixture. Dorigo Sempere decided on a width of around 0.3 millimetres.

In order to make the paper into postage stamps, the designer gave each piece serrated edges and replaced the watermarks found on typical stamps with barcodes.

He designed each barcode, which has been laser printed onto its algae stamp, to be both graphically and aesthetically pleasing and readable by optical sensors.

Users can also scan the codes with a smartphone, which will take them to a web link telling the full story of the creation of the algae paper.

After discovering that a 10 per cent ratio of algae caused the paper to become fragile and prone to crumbling, Dorigo Sempere decided on a percentage of algae that is between three and eight per cent.

This ratio gave him the option of controlling the colour and texture of the material without compromising on quality and printability of the paper.

According to the designer, the algae paper performs just as well as traditional paper, but boasts an off-white hue and powder-like appearance as a hint towards what organic ingredients lay within.

The From Venice with Algae stamps were created during his time at ÉCAL as part of the "Aesthetics of Sustainability" project.

Dorigo Sempere is among many designers exploring the positive qualities of algae.

The Bio-Integrated Design Lab at the Bartlett School of Architecture designed a series of algae-infused tiles that have the ability to filter toxic chemical dyes and heavy metals out of water. 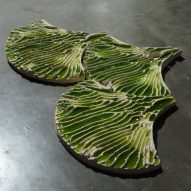 Cast Iron Design, on the other hand, created a guide book for the city of Boulder in Colorado using recycled paper printed with ink made from a by-product of blue-green algae, spirulina.

Images by Pablo Dorigo Sempere on behalf of Student Design.