American architect Marc Thorpe has developed a conceptual installation near Marfa and the border of Mexico that resembles a large spaceship landing on earth.

Thorpe's imaginary design is a huge polished steel volume with rounded edges that is supported on a slender pillar.

"The installation for the desert of Marfa would be a polished steel disc that appears to hover in the desert, gently reflecting the surrounding border of the United States and Mexico," Thorpe said.

Called Citizens of Earth, the installation is proposed for a barren piece of land on the boundary separating the United States and Mexico. The architect, who is based in New York, said it is intended to examine borders and imagine a world without them.

"The intention of the project is to question the value of international borders within the context of the 21st century," Thorpe said.

"What if there were no more borders? What would it take for mankind to shift from me to we? What if we all understood ourselves as citizens of earth working towards a common purpose? What would our new unified purpose be?"

Thorpe envisions the structure for about 20 miles (32 kilometres) outside of Texas town Marfa, which is an art mecca home to works by late American artist Donald Judd and others.

The shape of the design is intended to reference flying saucers and extraterrestrial life. In renderings, a light glows from its underbelly at dusk, which provides a nod to popular images of spaceships landing on earth.

Thorpe said that he also chose the orb shape to symbolise humanity and something beyond borders.

"Figuratively and literally, the disc reflects our existence on this planet," said Thorpe. "The disc stands a symbol of our humanity as citizens of earth." 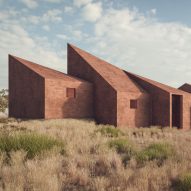 "It suggests that if we are not alone in the universe that we must represent ourselves as one united civilisation," he added. "A new perspective on borders would be in an effort to secure the future of humanity on earth and beyond."

The US-Mexico border has been the centre of controversy with Donald Trump's presidency, who has advocated for a new barrier wall to stop unauthorised migration into the US.

A number of architects and designers have proposed projects to challenge the president's plans to build a wall between the two countries. They include a binational city on the border, an installation of seesaws and a spoof of an IKEA furniture kit for cheaply building the barrier.

Thorpe's installation delves into the issues caused by borders, which he explores in his proposal.

"War, poverty, famine, disease, political and economic instability, terrorism, environmental degradation, racism, genocide and much more are all byproducts of the ceaseless reinforcement of borders," he said.

"The socio-political rationalisation for borders drawn on the earth have proven throughout history to be problematic," he added.

Thorpe has also built a black off-the-grid cabin in New York and envisioned a housing prototype for Senegal.

Images are by Marc Thorpe.