Italian architect Lorenzo Guzzini has completed a villa overlooking Lake Como in Italy, with a facade of grey moraine stone and an infinity pool.

The house, called Villa Molli, is built into a gentle slope in the town of Sala Comacina.

Lorenzo Guzzini positioned these two taller volumes at either end of the home.

They house four bedrooms over two storeys, bookending a central living space topped by a terrace.

Thin stone slabs have been used to create ziggurat-like stepped rooflines for the tower elements.

In section, the central area of the home steps down across four levels, beginning with a solarium and kitchen in its uppermost area.

A dining area sits in the middle of the levels, next to a lower living area illuminated by a skylight.

"This choice has generated an ever-different perception of the lake," said Lorenzo Guzzini.

"from an aerial view from the kitchen step, in which the window shows only the water of the lake, to the discovery of the sky on the step of the living room."

Villa Morri ends in an external terrace and infinity pool.

"The pool in the villa is not a mere cliché, but it has an architectural and symbolic function, uniting visually to the wild 'aqua dulza' of the lake," said Guzzini.

One sits with its gable end facing outwards to the lake, while the other has been rotated to match the orientation of an adjacent stone building.

Here, smaller windows frame views out to the lake and across the upper terrace to the other tower, creating private spaces that contrast the exposed living areas. 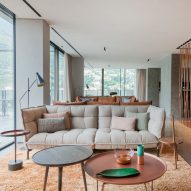 "The idea to rotate the volumes 90 degrees to each other was given by a strong link with the place: on one side the tower recalls the traditional neighbouring house," said Guzzini.

"The other closes the system, facing towards the lake."

Enclosed corridors lead to the dramatic reveals of views.

Previous projects by Lorenzo Guzzini Architecture include another home close to Lake Como that draws on the forms and landscaping of Japanese tea houses.

Photography is by Giorgio Marafioti.