Photographer Roberto Conte has captured the geometric shapes of Le Corbusier's weathered concrete buildings at Chandigarh's in his latest series.

Conte's images showcase the clean silhouettes of the buildings found in the modernist utopia, from the UNESCO-recognised World Heritage site of the Capitol Complex to lesser-known examples of Le Corbusier's design.

"With this project I want to give both an updated view of the current conditions of some iconic buildings of the history of architecture, and show the public that Chandigarh is also a lot more than the famous Capitol Complex, in terms of architectures and complexity," Conte told Dezeen.

The capital of the Indian states of Punjab and Haryana is the French architect's largest project.

Conte photographed the buildings at quiet times, putting the emphasis on the architecture rather than its surroundings.

"I checked the position of the buildings beforehand in order to have a better idea about the best possible time of the day for each architecture, according to the current season," said Conte, who is based in Milan.

"I tend to avoid the presence of people, even if in India, of course, it's harder than other countries," he added.

"In most cases it has been enough to wait some time in order to find a view where the architecture was the clear subject of the image." 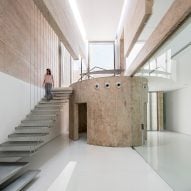 Oval-shaped meeting room is centrepiece of granite office in Chandigarh

Conte has spent years taking photos of modernist architecture all over the world.

"Chandigarh is absolutely one of the most attractive places for a photographer like me," he said.

"All in all, Chandigarh – exactly like Brasilia – is a planned city whose masterplan was organised by one of the most important architects of the 20th century."

"The fact that it's located in such a particular context like the Indian one made it even more interesting to me," he added.

Chandigarh was built after India was violently partitioned in 1947. Lahore was assigned to Pakistan and the Indian side of Punjab needed a new capital.

Chandigarh is designed in a grid system and was one of the first planned cities in India.