Indian architecture studio Charged Voids has designed Office 543 around an elliptic meeting room with granite walls, which is a private space among the glass-walled offices.

Designed for construction company Khullar Builders, the office is located in the Mohali district of Indian city Chandigarh, which was planned by modernist architect Le Corbusier.

The two-storey building was conceived by the local studio as a series of small spaces that branch off a central double-height atrium. Within this space Charged Voids designed an oval meeting room that contrasts with the otherwise linear  office spaces.

Directly connected to the main office and the central atrium, it is clad with the same Sivakasi gold granite as the building's exterior.

Alongside the meeting room and main office space, the ground floor contains a reception area and two courtyards, which were planted with small trees.

Openings between the rooms are designed to connect the office's narrow spaces with these courtyards and bring daylight into the workspaces.

"The interjection of courtyards and skylights is a strategy that allows us to experience the fragments of nature like the wind, light and greenery," said the studio.

"The courtyards are used as a buffer between the exterior and the interior, and break the powerful geometry of the elements of design."

A floating metal staircase within the atrium gives access to the first-floor, which contains a terrace above the rear courtyard, additional workspaces and an office. A small sitting area is located on top of the oval meeting room. 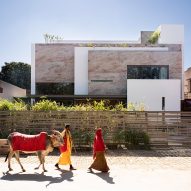 Additional space for future office spaces is located on the third floor. Designed for the possibility of expansion, these workspaces presently are accessed via a separate staircase on the right hand side of the facade.

The studio's design aimed to address the limited space available on 140-square-metre site.

"The idea was to utilise the small site by building the bare essential number of elements with each element achieving its maximum efficacy," explained Charged Voids.

The studio used a restrictive material palette of white marble and Sivakasi gold granite which gives the office its warm-coloured facade. The majority of the interior walls in the office areas are painted white.

Chandigarh was one of India's first planned cities and was masterplanned by Le Corbusier, who designed landmarks including the Neelam Theatre and Capitol Complex.

Photography is by Javier Callejas and Purnesh Dev Nikhanj.