Dezeen promotion: German manufacturer Kaldewei has developed a patented version of steel enamel that prevents mildew and discolouration from latching onto bathroom surfaces.

As the name suggests, steel enamel consists of steel sheets that are coated with enamel – powdered glass that has been fired to form a resilient veneer.

As such, the material combines the durability of metal with ability of glass to withstand chemical and thermal stress.

In the case of Kaldewei, the enamel's formulation is also non-porous and resistant to scratches, meaning it leaves no place for bacteria to settle in showers, bathtubs or basins.

Tests by independent inspection service TÜV Rheinland have shown that this seamless finish makes the steel enamel both more hygienic and easier to clean than joint sealant, which can be more susceptible to moulding.

Unlike acrylic surfaces, steel enamel is also UV resistant, meaning its colour does not yellow or fade over time. 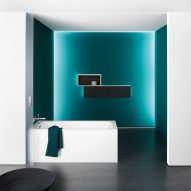 This is especially important in hotel bathrooms, as a Forsa survey commissioned by Kaldewei found that 62 per cent of participants said a clean bathroom was the most crucial feature in a hotel.

They ranked it as more important than a large, comfortable bed, even though on average we only spend between six and 30 minutes a day in the bathroom.

With mildew spots and discolouration being listed as some of the worst problem areas in hotel rooms, 95 per cent of interviewees said that they would not rebook a hotel with an unhygienic bathroom.

At the same time, half agreed that they preferred a bathroom that is not fitted out in plastic.

The production of a thermoplastic like acrylic also requires large amounts of energy and fossil fuels.

Previously, the heritage German manufacturer has created shower floors that seamlessly merge into the ground and a digital planning tool that supplies architects with 3D models of its products.