The project is located in the wind-swept region of Patagonia, which is shared by both countries and has mostly cold and cloudly climate year-round.

It is common to raise livestock here but a rewilding effort has been promoted to restore and rejuvenate Patagonia's grasslands.

The Lausanne studio built a series of buildings and renovated existing structures the 27,000-hectare ranch, which is home to 11,000 Merino sheep and 1,500 Hereford and Aberdeen Angus cattle.

The goal was to allow for the large-scale production of wool, as well as beef and mutton.

The new volumes are low-slung, rectangular designs with walls and roofs covered in corrugated iron to form a uniform aesthetic. They include a depot for storing machinery, a guest house and staff accommodation.

RDR Architectes chose to arrange the buildings in a cluster, like a village, to help create a well-sheltered environment suited to the climate. A shed for shearing sheep is located further away near the pastures.

The buildings are constructed with prefabricated wood and metal, which RDR Architectes chose to reference how pioneers to the region in the 19th century built. The use of the materials is also a contemporary reinterpretation of barns and warehouses.

"The layout of the complex is based on the model of a compact village, characteristic of the ranches of the region, where the utilitarian buildings and accommodation blocks are grouped together for protection against the rigours of the climate and to create places that are comfortable in the Patagonian desert," RDR Architectes said.

"The general aesthetics of the project were inspired by the traditional architecture of the region, which demonstrated extreme austerity and an almost primitive simplicity, introduced into the immensity of the Patagonian desert," it added. 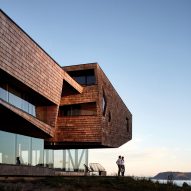 Rounding out the project is a house for the family who owns the ranch, which comprises two L-shaped volumes and a courtyard. A triangular design juts from the roofline into the sky and is clad in wood. Inside, the ceilings and walls are lined in the same wood as the exteriors and feature ample natural light and grey stone floors.

Estancia Morro Chico is complete with solar panels, wind turbines and a wood-burning boiler that is partly fuelled by bottled gas and replaces the former use of charcoal.

The ranch was founded by a Scottish immigrant in the late 1800s who arrived from Chile's southern city Punta Arenas via the Falkland Islands, which today is a self-governing British Overseas Territory.

"He played a major role in the famous 'gran arreo', during which 5,000 sheep were brought more than 2,000 kilometres across the wet pampa to settle the vast swathes of land that the government had granted to the colonists," RDR Architectes said.

"A century later, descendants of the same Scottish family are linked to an ambitious project aiming to complete and renovate the site."

Other projects in Patagonia are Tierra Chiloe hotel, Museo Regional de Aysen and Felipe Assadi's Awasi Hotel, all of which are part of Chile.

Photography is by Cristobal Palma unless otherwise stated.