Architecture studio Chybik + Kristof has revealed its design for a pavilion on the site of the greenhouse in Brno where Gregor Mendel discovered genetics.

The greenhouse is located in Brno in the grounds of St Thomas' Abbey, an Augustinian monastery built in the 14th century.

Gregor Mendel, a scientist and abbot of St Thomas' Abbey, conducted a series of experiments from 1856 to 1863 growing pea plants in his outdoor laboratory, which lead to his groundbreaking discovery of inherited characteristics.

The original greenhouse structure was swept away in a storm a few years later, leaving behind only its foundations.

Chybik + Kristof is building a new greenhouse-style pavilion on the site.

Due to be completed in 2022, the Mendel Greenhouse will be a part of the commemoration of 200 years since the scientist friar's birth.

The pavilion will host conferences and lectures at the Abbey, which still continues a programme of scientific research under its current abbott, Cyrill Napp.

The architecture studio decided to combine the greenhouse's original design with elements that allude to the site's scientific importance. 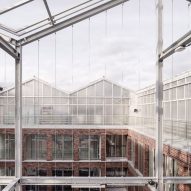 The Mendel Greenhouse will match the original building's size and shape, with its distinctive slanted roof. Chybik + Kristof consulted material from the archives, including old photographs and plans.

"The nodes and branches constituting the steel supportive framing are in direct dialogue with his laws of inheritance, in particular that of hereditary segregation," said Chybik + Kristof founder Ondřej Chybík.

"Building on this notion as well as Mendel’s original drawings, the resulting, highly complex structure pays homage to his legacy," he added.

Large panes of glass will cover the steel frame to form a roof, with the tallest side left open to the surrounding monastery grounds.

Underground heating will keep the Mendel Greenhouse warm in winter, while blinds and shades will prevent it from getting too hot in the summer.

Chybik + Kristof was founded in 2010 by Ondřej Chybík and Michal Krištof, and has offices in Prague, Brno and Bratislava.

Recent projects include a Prague food market made of shiny metal cabins, and a Czech wine bar in a 19th-century brewery.