This office and residential building near Quito, Ecuador was designed by local studio Diez+Muller to enclose a staggered atrium for yoga classes.

The mixed-use complex is located in Tumbaco Valley, which is 14 kilometres from the Ecuadorian capital. Diez+Muller described the area, which has a lower altitude than Quito, as having a "remarkable climate and natural conditions".

The project comprises a roughly 70:30 mix between offices and apartments, including the firm's workplace and the home of its co-founder Felipe Muller.

Called Natura, it is located on a sloped site that was already home to vegetation such as jacaranda, acacias, carobs and avocados.

Most of these were on the outer edges of the site, so the studio place the 6,841-square-metre building in the centre of the plot to save as much of the greenery as possible. The remaining vegetation was replanted in a nursery.

An atrium is carved out of the centre of the three-story-high structure. Touches of greenery are present here including plants that spill over balconies wrapping around the void and a tree that grows up the centre.

The atrium is segmented into three levels designed to traverse the existing gradient of the site, which slopes down from the entrance towards the rear of the building.

Each platform is intended as a space to encourage users to gather. The first platform has an angular bench around a planter, while the middle section is an open space suited to activities like yoga. The final section is covered in gravel and leads out to a garden that allows for natural ventilation.

"We have planned a building that generates healthy spaces for its users," said Diez+Muller. "Spaces endowed with vegetation and light, with generous shared spaces for communal interaction."

"They are also versatile spaces that can be used by the community as places for exhibition, health, culture and art," it added.

Upper-level walkways cross over the space and are intended to offer views to maintain the connection between the different levels.

"This atrium becomes a connector space," Diez+Muller continued. "A space that generates paths and promotes encounters between users, through horizontal and vertical circulations of different types." 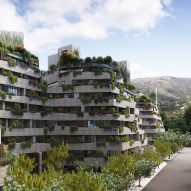 The atrium also demonstrates the range of materials used through Natura. They include stone tiling on the floors, warm wooden panelling and white-painted brickwork walls. Walkways have concrete bottoms and black, metallic banisters.

Diez+Muller chose the materials because they are well suited to the area's climate and will weather well.

"These materials are worked and found regularly in the local environment, and have the virtue of being timeless options that will gain quality over time," it said.

The materials continue inside the practice's office, which is on the upper level of the complex. It contains an open studio with windows to views of the surroundings and a meeting room.

Muller's apartment is located on the ground floor of the building. The residence is arranged in an L-shape around a patio, with large windows and glass doors offering views of the outdoor area.

Glazed partitions separate different spaces inside, which include a lounge, a study, and an open-plan kitchen and dining room. A black metal stair leads to the bedrooms on the first level.

A wave of new projects are underway nearby in Quito, where leading architects are designing major projects for architectural developer Uribe & Schwarzkopf. They include Jean Nouvel's lush Aquarela community and the YOO Quito residences completed by Arquitectónica and YOO studios, which is run by Philippe Starck and John Hitchcox.

BIG has also designed two projects for Quito that include mixed-used tower called EPIQ, which is covered in pink, herringbone-patterned cladding, and the curved IQON tower that is set to become the tallest building in the city.