Architecture firm Shau has built a library in Semarang, Indonesia, featuring a grand staircase, a net floor and a large communal swing.

Microlibrary Warak Kayu is a public reading room for the Central Java city, but also functions as a mini community centre.

Not only does it offer a variety of spaces for reading and study, it can also be used to host group events and workshops.

It is the fifth "microlibrary" that Shau – a studio with offices in Rotterdam, Munich and Bandung – has built in Indonesia. Shau's aim is to improve access to learning for those living in the country's poorest communities.

The architecture studio deliberately added some playful details, so that the library would engage children and families. But most of its unusual features also serve some kind of function.

For instance, the hammock-like net floor creates a comfortable setting for children to sit down and read a book, while parents can observes them from below. Similarly, the giant staircase creates an auditorium-style seating area for watching performances or movies.

"It is important to have this multi-programmatic approach to make the library a popular place, since reading alone is not yet considered a fun activity in the country," explained architects Florian Heinzelmann and Daliana Suryawinata.

The building is raised up from the ground on wooden columns, which creates a reading room on the first floor and a sheltered, open space at ground level. This layout is designed to make the building appear more welcoming to new visitors.

The entire structure is built from a variety of FSC-certified woods including bangkirai, a locally sourced tropical hardwood.

The architecture studio knew from the outset that all elements would be prefabricated by local timber manufacturer PT Kayu Lapis Indonesia. So the microlibrary was designed around the company's existing product line, reducing both waste and cost. 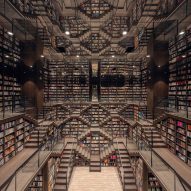 The Zollinger Bauweise construction system was used to create the diagonal-patterned brise soleil that naturally shade the bookshelves. The name, Microlibrary Warak Kayu, stems from this element.

"It is a form of reciprocal system, resulting in a distinctive slightly shifted diamond pattern," said Heinzelmann and Suryawinata.

The structural system is highly decorative, even though it is largely made from offcuts. An overhanging roof, which offers passive shading, is supported on neat, crisscrossing beams, as is the floorplate below.

Thanks to these various elements, the building doesn't need any air conditioning, despite the tropical climate.

"The building could be seen as a living educational spot for wood material and construction techniques," said the architects.

Shau built its first microlibrary in Bandung in 2016, using recycled ice cream tubs as cladding. It has since designed several others for the city, and completed another in Bojonegoro.

Microlibrary Warak Kayu was funded through through a donation from the Arkatama Isvara Foundation and will be managed by Harvey Center, a local charity group. It will become part of the city's tourism route, served by a free bus tour, to encourage as many visitors as possible.

Photography is by KIE.