Klein and Dytham are also founders of the PechaKucha presentation format, and the interview follows the live streaming of last night's PechaKucha Inspire The World event.

In the live interview with Dezeen founder Marcus Fairs, Klein and Dytham discussed the www.pechakucha.com format, in which each participant shows 20 images for 20 seconds each.

Klien and Dytham also spoke about their architecture projects and about life in Tokyo. 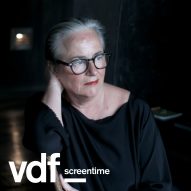 The interview is the second live conversation in our VDF Screentime series, which launched yesterday with an interview with trend forecaster Li Edelkoort.

Klein and Dytham met at London's Royal College of Art and moved to Tokyo to work for Japanese architect Toyo Ito. They founded Klein Dytham Architecture in 1991.

Projects completed by their architecture studio include Tokyo's landmark Daikanyama T-Site bookshop, as well as a book-lined "village" of shops, restaurants and co-working space within Amanda Levete's Central Embassy complex in Bangkok.

Dytham, a keen drone user, also appeared as an interviewee in Elevation, Dezeen's documentary about drones and their impact on our future cities.