Perched 50 metres above Bangkok in Amanda Levete's sharply pointed 37-storey retail and hotel tower, Open House is a 4,600-square-metre, double-height leisure space that comprises fourteen restaurants and bars, an art gallery, a bookstore, a co-working space and a children's area.

"Today's mega cities – especially in Asia – have turned their back on the people who visit, live and work in them," explained the Tokyo-based firm. "People are either working, shopping, eating or in transit between spaces. There is nowhere to pause, take a breath, sit or simply get back in control of your senses, especially in the stifling heat of Bangkok."

"Open House was seen very much as the antidote to this – it is an oasis, a getaway – a place where you can feel at home."

In order to make the space easily navigable, Klein Dytham developed a series of towers for each of the space's fourteen restaurants. Functioning like "totems", the towers make the restaurants clearly visible from a distance, while also hiding messy kitchen hoods and ventilation ducts.

Each tower is clad in a unique timber fretwork pattern, which is reflected in mirrored panels that are mounted on the ceiling around each tower.

Elsewhere, 9,600 leaves have been hand painted onto the ceiling over the course of six weeks to create a huge art work. Inspired by the Central Embassy's leafy surrounds (it overlooks the British Embassy complex on one side and green treetops on the other) the architects came up with the hand-painted mural as a way of bringing the greenery inside.

"We suggested that the whole of Open House stay under a huge canopy of leaves," explained the architects. "To achieve this and reduce the impact of the extensive white ceiling, we devised a pattern of leaves that spreads across the whole space."

Instead of occupying one box-like retail unit, Open House's bookstore weaves its way throughout the entire Open House space. A tall book shelf has been installed at one end of the space, while a large double-height library wall wraps around the other.

Smaller book shelves with integrated seating are scattered throughout, blending into the bar and restaurant spaces so people can browse at their leisure.

"In a world dominated by online book sales, highly curated bookstores like this, which focus on Asian art and culture, are becoming increasingly important and popular now that the physical browsing experience is everything," said the architects.

An "art tower" topped by a tree-lined lookout point is located directly under the building's main roof light. Inside, a small gallery forms an intimate space for art exhibitions.

On the outside, the tower is equipped with illuminated display shelves for future art exhibitions and installations.

A programme of talks, book signings and culinary workshops has been devised to attract visitors up to the space. For these occasions, a stepped seating area provides space for an audience.

Behind the book wall, a quiet co-working space called the Greenhouse offers a suite of meeting rooms as well as secluded space for working. Here, food and drinks can be ordered from the space's restaurants and delivered to your desk. 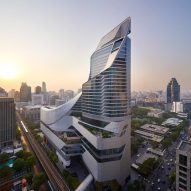 The aluminium tile-clad tower is set in the former gardens of the British embassy in Bangkok and hosts a luxury shopping centre at podium-level and the five-star Park Hyatt hotel across its upper floors.