The concrete rooms of Jipyungzip, a guesthouse by BCHO Architects in South Korea, are sunk into a grassy slope with flat roofs that form terraces overlooking the sea.

Six cuboid forms are arranged around a central open space, with smaller studio-style accommodation blocks to the south.

Long, thin bedroom blocks to the north face out to sea, flanked by concrete walls that merge into the landscape.

"The predominant mode of seaside development in Korea has ravaged the natural coastline," said BCHO Architects. "This project instead seeks a healing embrace where the building meets the earth."

BCHO Architects used jets of high-pressure water to erode areas of the concrete, carving deep veins out of the surface of walls and floors to create areas for plants to grow.

"Sunken within the terrain, these walls become a verdant expression of a relationship with nature predicated on humility and softness," said the studio.

Rooms are oriented so that the sea is the first thing guests see when they wake up.

Each unit is accessed via wooden steps that cut into the landscape, leading to a porch-like structure clad in thin wooden slats.

The porches are topped by a corrugated metal roof, with concrete roofs separated by a strip of clerestory glazing.

Opposite, the smaller blocks to the north are divided by sections of angular concrete wall that create sunken courtyards, divided by wooden screens and overlooked by windows in the adjacent blocks.

In the centre of these blocks, the communal dining room can be opened up to a low-walled terrace via a full-height concertina glass door. 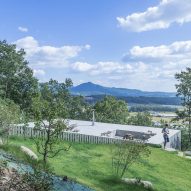 The raw concrete of Jipyungzip's interiors is tempered by pale wooden ceilings and wall panels to create simple, open spaces.

BCHO Architects has previously explored the idea of sinking structures into the landscape, with projects including a holiday home in Gyeonggi Province nestled into mountainous terrain.