Dutch architect Van der Linden came to Japan from Europe to work on the huge complex, which was completed in 1997 and is the second-largest station in Japan.

"In 1992 it was the second time that I came to Japan," says Van der Linden as he revisits the building. "And it was the time I started working for Japanese architect Hiroshi Hara."

The glass-and-steel building was commissioned to celebrate the 1,200th anniversary of the founding of Kyoto and replaced the former station that had burned down.

"And what I was doing was working on this building here: the Kyoto Station," Van der Linden adds. "We started off making a model out of the whole structure. I made the model out of cardboard. It took me almost three weeks to complete it."

The 15-storey station contains a hotel, a shopping mall and a cinema as well as platforms for multiple rail lines, including Shinkansen ("bullet train") services to Tokyo.

"Every detail was designed by Hara"

"Everything that you see, every detail, was designed by Hara," Van der Linden recalls. "I think this attention to detail, and this enormous complexity within a very simple design principle, works very well in this station."

Hara's deconstructivism-inspired design proved controversial, with some feeling it was out of context with the ancient city. 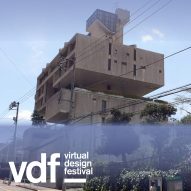 "The design concept behind the building is a geographical valley," says Van der Linden as he walks through the cavernous concourse, which is fed at each end by mountainous stairs.

"So people travel from north to south through the building. They also travel up and down the building, going to the department stores and to the hotel on the other side."

The building is "all about circulation"

"I think the flow of people works very well," Van der Linden concludes. "It's so easy to orientate yourself throughout the building. So you can see the building is all about circulation."

Other buildings by Hara include the Sapporo Dome in Hokkaidō and the Umeda Sky Building in Osaka.

Van der Linden, founder of Tokyo-based Van Der Architects, originally produced the movie for his One Minute Architecture channel on YouTube. He has chosen eight of his videos for a special series on Virtual Design Festival.

Virtual Design Festival has teamed up with Van der Linden to present a selection of his best short architecture movies.