In his second video selection for Virtual Design Festival, Martin van der Linden explains the metabolist characteristics of Kenzo Tange's Kuwait Embassy, which the video blogger describes as one of his favourite buildings in Tokyo.

Van der Linden has produced a host of short videos about Tokyo architecture for his One Minute Architecture channel on YouTube, eight of which he has selected for Virtual Design Festival.

In this video, he said that he ranks Tange's 1970 Embassy of Kuwait as one of his favourite buildings in the metropolis.

"People often ask me: 'What's your favourite building in Tokyo?'" van der Linden said while standing opposite the seven-storey concrete structure in Tokyo's Minato ward. "The building here behind me is definitely one of my favourites."

Designed by renowned Japanese architect Kenzo Tange in the late 1960s and completed in 1970, the embassy building comprises a series of stacked, cantilevered concrete boxes. These house offices on the lower floors, while the ambassador's residence occupies the upper levels.

Embassy "has a metabolist feeling"

According to van der Linden, the building features many of the characteristics of the metabolist architecture movement, in which Tange was a key figure.

Emerging in Japan after the second world war, the movement explored concepts around modular architecture and megastructures.

"On a 923-square-metre site, Tange started the design in 1966 for a seven-storey concrete building," Van der Linden explained. "The building has a Metabolist feeling to it. It might look like a stack of boxes, almost haphazardly stacked on top of each other. But you're wrong." 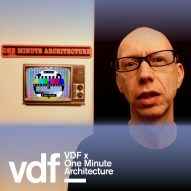 "The building is built around two central cores," he said. "We can see that the main building looks as if it is hanging from these two central cores. We can see two steel suspension rods, cantilevered from each core, holding what appears to be the main three-storey box. A typical metabolist plug-in technique."

"I don't know if this was Tange's idea, but structurally this looks like a person carrying two water buckets," van der Linden added, before going on to describe some of his favourite features of the building.

"On the ground floor, a wall holds a plinth, leaving a double-height space underneath for the main entrance," he said. "On the right side is a glazed box, floating above the underground parking entrance, and penetrating through the plinth into yet another cantilevered box."

"An architectural theme I have personally tried to explore"

As well as running the One Minute Architecture YouTube channel, Van der Linden is an architect himself and is founder of Tokyo-based firm Van Der Architects.

"I really like these stacked spaces with gardens on them," he concluded in the video. "This is an architectural theme I have personally tried to explore as well."

Virtual Design Festival has teamed up with Van der Linden to present a selection of his best short movies about Tokyo architecture.