Architecture firm Studio Saxe has designed this athletic complex for a Costa Rica hotel to be like "a small village amongst the trees".

The Athletic Center is an addition to The Gilded Iguana hotel in Nosara, Costa Rica, a residence that Studio Saxe renovated in 2018. It is conceived as a modular construction built around the existing vegetation on the site.

Measuring 615 square metres, it houses a surf-shop, bike-shop, gym, exercise studios and massage rooms that can be used by resort guests and locals.

"The Athletic Center was designed as a small village amongst the trees that creates a public space which integrates locals with visitors with similar interests of pursuing an active lifestyle and wellbeing," Studio Saxe said.

To preserve the landscaping already on the site, Studio Saxe designed the health facility to comprise separate structures. These are built around the trees and other vegetation that connect to one another by a series of raised footbridges.

"It was designed to preserve and protect the existing vegetation and natural habitat of its surroundings through intelligent engineering by disintegrating the mass of the building into many components to distribute the project around trees and vegetation," the studio added.

Each of the buildings is constructed with a prefabricated steel frame clad in reforested teak wood. Long roof overhangs span across the top of the structures to shade and protect the interiors from sun and rain. They also collect water used to power the building's mechanical and irrigation systems. 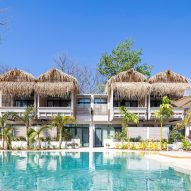 It was prefabricated in parts off-site and assembled quickly to not impact the land and businesses already located on the property.

The design is also intended to consider bioclimatic factors such as solar orientation, wind pattern and noise. Its large windows and expansive rooflines permit the building to consume minimal energy.

Rectangular plant boxes with spilling greenery and large windows front every face of the structures. Raised wooden walkways with metal railings join the upper levels of the separated buildings, while similar stone paths traverse the grounds.

Inside, the exercise room floors are covered with blue vinyl mats. Spotlights and sporting equipment including ropes and punching bags hang from tracks attached to the wood beams that span across the ceilings.

Four sink basins and several plant boxes are carved into a monolithic stone piece to form a counter in the complex's bathroom. Shades constructed using slats of wood control the amount of light that enters the space.

Studio Saxe was founded by architect Benjamin Garcia Saxe in San Jose in 2004 and now also has offices in London and Los Angeles.

Its other hotel projects in Costa Rica include a boutique hotel and yoga studio surrounded by jungle plants and a series of guest rooms that stagger down a sloping beach site.