The final instalment of VDF's collaboration with MAAT features a video overview of the Currents - Temporary Architectures by SO-IL exhibition that was due to open at the Lisbon museum, plus a text written for the show by Beatrice Galilee.

The video, by Rita Nunes, offers a sneak peek of the exhibition about SO-IL's temporary projects as well snippets of text by New York curator Galilee. Her full text is published below.

"This video animation is a sneak peek into the exhibition revealing a selected series of projects in a montage of images, videos and texts that are part of the show," says Beatrice Leanza, executive director at the Museum of Architecture, Art and Technology.

"Here we learn of past and present references through projects, books, and inspirations that have informed the ideation of these interventions and their final outcomes."

SO-IL is a Brooklyn-based architecture studio founded by Florian Idenburg and Jing Liu.

The projects featured in the video are SO-IL's 2015 Blueprint at Storefront project at New York City's Storefront for Art and Architecture; Poledance (2010) at MoMA PS1; L'Air Pour l'Air (2017) for Chicago Architecture Biennial; Into the Hedge (2019) at Columbus, Indiana; In Bloom (2010 - unrealised) for Amsterdam; a project for Frieze Art Fair in New York in 2012-2013; and Transhistoria at Jackson Heights, Queens, New York City for the Guggenheim Museum.

Both the exhibition and SO-IL's temporary Beeline installation remain shuttered until further notice due to coronavirus, so MAAT executive director Beatrice Leanza has instead teamed up with VDF for a virtual launch.

SO-IL's collaboration with MAAT was created with the support of Portuguese cultural organisation Artworks.

Below is the exhibition text by Galilee:

During a conversation concerning the temporary projects of SO-IL, the New York-based architecture office, its founders and directors Jing Liu and Florian Idenburg start laughing, a lot. "Wait a minute, isn't all architecture inherently temporary?" asked Liu. "Are we not - and isn't everything - eventually going to cease to exist?" continues Idenburg, with a smile.

After ten years of running a firm, it is vital to be able to see the long view. Today though, this exhibition is addressing the specifically durational and temporal practice of SO-IL. The architectural works that are confined to a few days, weeks or months, reflecting as they do a multiplicity of meanings into the atmosphere, attitude, and philosophy of their architectural practice.

In this small, focused display, you will encounter pairs of projects, each touching on multiple dimensions of a single motif. The voice of the architects will appear throughout, sharing in their own words with each other and us, the relevance of these very temporary projects. We will hear the origins of signature styles, meet references, homages, and books, and identify where else these ideas have appeared in later works.

Through six different currents, An Open Work, Rethink the System, World Building, Kinetics and Canopies, A New Skin and Unraveling a Threat, we meet the dynamic forces and soft transitions that ebb and flow in the life of one of the most exciting international architecture studios today.

SO-IL's nascent office took root in New York City in 2008, just as the global financial crash was unfolding. The effects of this massive destabilization were felt across all cultural and social systems, and the young studio took this condition as the premise for their winning competition entry to the annual MoMA PS1 Young Architects Program pavilion.

Poledance comprised a spatial system of a grid of flexible poles and nets that were at once interconnected and co-dependent as untethered and encouraging of dance, movement, and spontaneity. This open-ended outlook counted on the public's engagement to 'complete' the experience of the installation and was influenced by philosopher Umberto Eco's book The Open Work (1962). 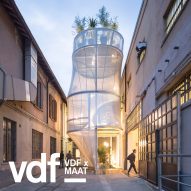 In the commission for the iconic non-profit space Storefront for Art and Architecture, the architects explore a different notion of openness: by shrink wrapping an arts space famous for opening its doors to the street in white plastic, the project forced its performative facade into stasis while generating a radical new space both on the street and inside the exhibition space.

The approach of wrapping and veiling creates ambiguous forms and spaces that require interpretation, and as such, invite the audience in. Other "Open Works" in SO-IL's oeuvre included in this section are the proposal for an art gallery in Brooklyn (Maujer Art Space) and open, unprogrammed public spaces of The Manetti Shrem Museum at UC Davis in California.

This couplet of projects explores bespoke short-term projects that skillfully use repetition and innovation to hack standardized systems to fundamentally alter the visitor's spatial experience. On one hand, a pedestrian ramp at the inaugural Chicago Architecture Biennale is transformed through a sequence of made of standard metal structural studs, creating portals and frames that change in height and proportion.

On the other, the first New York edition of the commercial Frieze Art Fair that through a simple gesture of a repeated triangular wedge turned a necessarily boxy, cartesian plan into a playful, snaking system, opening up the visitor's experience of the fair to include the river that surrounded them.

The assignment for both projects demanded the bringing of life and imagination to a large, new and culturally engaged public to an otherwise generic and stale space. While all architecture projects – temporary or otherwise – seek to transform space, these elegant solutions twist and turn, referencing ideas and readings of the philosopher Paul Virilio and theorist and architect Claude Parent who advocated for a holistic bodily experience of architecture that centered around the body moving through space, not only about its material qualities SO-IL's intervention in the Chicago Cultural Center makes Parent's notions an experience.

The professional trajectory of SO-IL has also followed the path of their family life in Brooklyn, New York. As first-generation immigrants, Idenburg from Netherlands and Liu from China, the couple chose to build their architectural practice along with the project of raising their two daughters, an experience that brought matters of adaptability and learning to the foreground.

In this current, we meet the architectural ideas and actions of the studio that rely on the immaterial forms of building: in Transhistoria the architects commissioned and recorded a series of 13 stories that were spoken out loud to migrant communities in one of New York's most diverse neighborhoods. 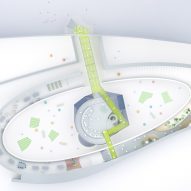 50 volunteers participated in the installation and each story, written by a poet, writer or priest, was asked to speak to the idea of belonging, relationships and emotional bonds that are created through fictional, fantastical, emotional tactics.

The studio also explores World Building in a guerilla project for a biennale in Chengdu, China, that sought to generate random life and growth of green life in the rapidly urbanizing city. The studio's scope for masterplanning projects and working with entire cities extends to recent projects in Miami, upstate New York and Hangzhou, and a hypothetical project The End of Fictionalism.

While temporary projects can be vehicles to experiment with complex thoughts and ideas, they can also be a place to perfect the simple things. In this pairing, SO - IL's intentions are distilled to the basics: how to inhabit a space. The project Spiky exhibits both of these inclinations; it is a project that generates volume, light, shelter from a single sheet of stainless steel. When the cuts are extruded they form a series of delicate conical shades, playfully mediating its environment, challenging its appearance as either shade or shelter.

The unrealized pavilion In Bloom was in collaboration with an artist, Ben Kinmont which was intended to form the center of a neighborhood for a period of one year. Its canopy was designed to change its appearance - from a petal-like shade to a crown or John Hejduk-influenced castle-like character, during the seasons; offering a lesson in semiotics and symbolism.

A certain fascination for meshes, metals and canopies and their kinetic capacity to generate ambiguous, open-ended and complex spaces is a current that extends through their practice, appearing at the Manetti Shrem Museum, the Long Island House, and Kukje Gallery in Seoul.

An important quality of impermanent architecture is its capacity to offer both architect and user space to fantasize and fabulate. In A New Skin, SO-IL invites us to reimagine the ways in which the exterior material of architecture – its skin – can experiment with forms and operate in playful and thoughtful tandem with its environments.

For Breathe, a speculative 'home of the future', the studio stretched intelligent pollution-filtering fabric across the entire structure, creating a porous light-filled spatial experience for its imagined occupants. Each room was stacked upon the next, offering the potential for the skin itself to change with different conditions and to radically question individual tolerances and capacity for physical and emotional transparency.

The architects also sought to question the relationship between body, self and the environment we breathe through the intimacy of the home In a performance, L'Air Pour l'air in collaboration with artist Ana Prvački, a related skin, and familiar geometry is seen at a human scale. An ensemble of four musicians wore a mesh fabric suit that was intended to purify the air for an unearthly performance in Chicago's Garfield Park Conservatory, as the performers moved through space, conjuring imagery of the extremities of our search for purity, privacy and survival.

Throughout this exhibition, many formative influences of the studio have been revisited, from the recurring presence of Bauhaus artist Oskar Schlemmer to contemporary authors and philosophers. In these final projects, both commissioners and designers pull further at the threads of history, using installations as ways to examine and recontextualize important historical figures and ideas. For Tricollonade, at the Shenzhen Biennale, the project was part of a historical reenactment of Strada Novisimma, an iconic exhibition organized by Paolo Portoghesi for the first Venice Architecture Biennale.

For their installation, SO-IL took as their starting point the idea of a facade itself, presenting a colonnade reinvented as a marble and mirror prism. In Columbus Indiana, a city famed for its support of modernist architects, SO-IL worked with a paragon of modernism in the US, the Eero Saarinen-designed Miller House and Garden.

The installation Into the Hedge diverted 130 Arbor Vitae trees that were destined to be planted in the garden of the Miller House itself and temporarily relocated them on the lawn of the city's courthouse, creating a maze-like installation interweaved with brightly colored nylon webbing that uses the color palette from the house's interiors, all chosen by Saarinen's favored graphic designer Alexander Girard.

Photography is by Iwan Baan (Blueprint), Laurian Ghinitoiu (Breathe) and SO-IL (In Bloom and Breathe.)