Coen Car is a concept design by Nendo that envisions children playing with a fleet of autonomous vehicles that function as pieces of mobile and interactive playground equipment.

Curved edges and blinking eyes made from rows of flashing LEDs give the black and white-striped vehicles a friendly appearance.

Named after the Japanese word for park, the play cars would autonomously travel around parks or kindergarten areas, transporting children as they play.

Nendo envisions the vehicles driving from place to place in a line "like circus cars on the road".

The first design, called Agaru, features a trolley-like structure that allows the child to stand inside while being driven around.

A section of mobile floor would move up and down to raise the child up to a higher position so they can access another activity.

The Mawaru apparatus features a semi-circular design with soft spikes dotted across its surface, resembling a cartoon hedgehog. Children can use these spikes to climb on and over the piece of equipment.

The Yureru operates an "unsteady sideway motion" similar to how children would play on monkey bars and swings. It has one long spike that the child can hold on to as it sways back and forth.

The tubular Suberu design functions like a slide, while the bowl-like Haneru apparatus can be used like a trampoline or a soft ball pit.

The final object, Yasumu, is designed to encourage breaks from activity. A row of interconnected pods form a train, with the leading pod filled with a potted plant.

The Agaru can also be used in conjunction with the other designs, acting as a step-up to the top of the Suberu slide or the Haneru.

Alternatively, two of the Agaru vehicles can be placed facing one another and can be raised and lowered at alternate times to act as an electric see-saw.

The concept is designed with an accompanying app that allows users to keep informed about where the vehicles are driving to and what time they are arriving at nearby parks.

"With cutting-edge technology, the project aimed to create a new relationship between people and cars that is more than a just means for transportation," said Nendo.

"It completely switched the old view of cars as something we should never play near, to something that plays with kids right beside them," it added.

Typically known for its work with IT-related services, such as development and operation of mobile games and social media, DeNA also works on urban infrastructure development and sports management.

It was this side of its work, combined with its speciality in artificial intelligence (AI) and autonomous driving technology, that led it to collaborate with Nendo on the Coen project. 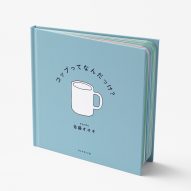 The two companies worked together with the brief of designing "a car of the near future that plays with children".

The AI technology suggests new ways to play based on similar situations it has learnt from in the past, while the driverless element of the equipment works to ensure the children's safety.

This is not the first time Nendo has steered its design towards kids. The Japanese studio previously created a children's picture book that tells the story of a cup trying to solve the problem of not having a spoon.

Titled What is a cup?, the book aims to explain how creative design ideas are born. Once the mug notices that it doesn't have a spoon to stir coffee and milk, it tries to solve the issue by changing itself into various different forms.