The Shinto religion is practised throughout Japan in temples that feature several gated entrances called torii.

"Gates can be found throughout the world, not just in Japan," van der Linden says. "A gate is a symbolic entrance into a new world, moving from the realm of the everyday, mundane life into another higher realm."

While there are over 60 types of torii gates, they are usually built in either the Shinmei or Myojin style, van der Linden explains in the video.

The Shinmei torii has a simple form built from two pillars, which are topped by a horizontal lintel, called a kasagi. The whole structure is kept together by a central tie-beam called a nuki and can be made from a variety of materials like wood, stone or steel.

"In larger shrines, there are often multiple gates. The biggest, usually located at the entrance, is called ichi no torii," van der Linden says.

"Some of these gates are decorated with shimenawa, a rope made from rice straw and used in Shinto purification rituals," he adds.

While structurally similar to the Shinmei torii, the Myojin torii has a lintel that curves upwards with an added roof-like structure above it, often painted black.

Van der Linden cites the floating torii gate of the Itsukushima Shrine in Hiroshima, as an example of a Myojin torii.

"It is built in the Ryobu style and stands in the water with the tides coming in and out," he says. "The reflection of it in the water is beautiful." 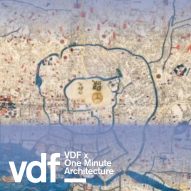 Van der Linden explains that torii gates are often painted in a vermillion red because the colour is believed to protect against evil. But also because of the preservative effects of the mercury found in the paint.

"Even after 28 years, I found Tokyo endlessly fascinating, and I enjoy making videos of its architecture, and its rather mysterious urbanity," he says in a specially created video introducing the collaboration.