Two monolithic concrete walls by designer Luca Fortin are arranged "like an opened book" to form a passageway inside a Quebec City park.

Entre les lignes, which translates as between the lines, separates an urban area of the Canadian city from Chauveau Park located alongside the St Charles River.

It is intended to beckon park visitors to pass through the rounded archway into the wooded space.

"Like an opened book, this work is an invitation to walk through a new landscape, whether real or imaginary," Fortin said.

"Offering visitors access to a transitionary space between the urban and the natural areas of the linear park of the Rivière-Saint-Charles, framed poetically by the wide arch-shaped portal," he added.

"Acting both as an entranceway and finish line for its pedestrian public, the piece is an open invitation for contemplation, a catalyst to reawaken a desire to dream and reconnect to the natural landscape shared by all."

The sculpture comprises two walls formed by stacked concrete slabs that measure eight metres long and four metres high. Fortin used a wooden mould for the concrete to give it a marked texture.

A rounded archway, cut out from one of the walls, straddles the path to form an access point through which park visitors can traverse. The pair are arranged at a slight angle from one another leaving a wide opening on one end that follows the pathway. 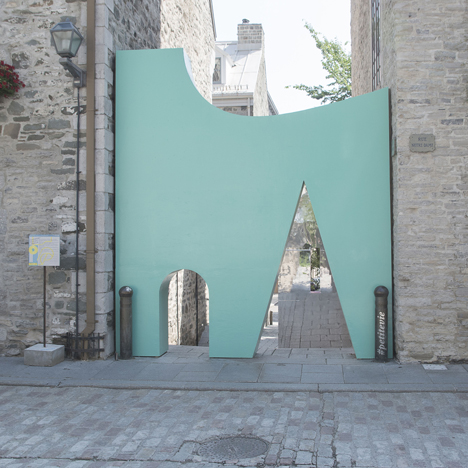 Rigid lines and small holes stretch across the grey walls in a manner similar to text-markings.

"Diffused colours, streaks and textures leave abstract palimpsestic traces on the walls, their almost script-like appearance invites viewers to decrypt them as they wish," Fortin added.

Changing seasons and weather, such as rain and snow, will transform the structure's composition throughout the year.

"The cycling of the four seasons, with the succession of rain, falling leaves and snow, will change the intrinsic appearance of the concrete, constantly offering passers-by a new version of its story," the designer added.

Photography is by Felix Michaud, unless noted otherwise.