A tunnel formed from bright pink partitions and a giant paper aeroplane are some of the temporary urban interventions to be spotted around Quebec City.

The Passages Insolites – unusual passages – programme includes nine installations by various architects and architects, scattered across the Canadian city's downtown area. The project was set up by arts organisation EXMURO, which aims to disseminate multidisciplinary works in urban public spaces.

"Discover nine playful and intriguing installations by visual artists and collectives of architects that question our relation to the world and the urban space," said EXMURO.

The most noticeable are a set of pink structures connected to the 17th-century Royal Battery fortifications facing the St Lawrence River, which appear to penetrate the historic stone ramparts.

Designed by local architecture collective Les Malcommodes, the tunnel is perforated with hole that get larger as the visitors descends, while square pink frames run down its length inside. An angled mirror at the end creates the impression that the passage continues deep into the battery.

"Impostor raises questions about the uses and abuses of historic landmarks with an illusory passage through the Royal Battery," said the group. "By making two structures meet in a previously impenetrable site, the project evokes and interrogates the theatricality and sleight-of-hand inherent in the often factitious recreations of historic buildings."

Another highlight is giant paper aeroplane that appears to have crashed into the ground, resulting in a crumpled nose. When Paper Planes Stop Catching Wind was created by Montreal and Vancouver studio Atelier MAP.

"The work evokes the hard passage between childhood and adult life," said the studio. "The plane, symbol of lightness and dreams, experienced a difficult landing."

Canadian designer Marie-Eve Martel's Space Cube looks like a reflective box by day, but glows to reveal an imaginary world inside by night.

Rows of dumpsters turned upside down and hoisted into the air on stilts create another passage: Celestial Garbage by Collectif Allard-Duchesneau. When underneath, visitors walk through dangling chains hanging from perforations in the roof, where mirrors are also installed.

Others in the series include a spinning tree by Robert Hengeveld, a trailer topped with a white zeppelin by Sculptosaurus, and a series of woven canoes by Giorgia Volpe.

Now in its fourth edition, Passages Insolites will be on view until 15 October 2017. 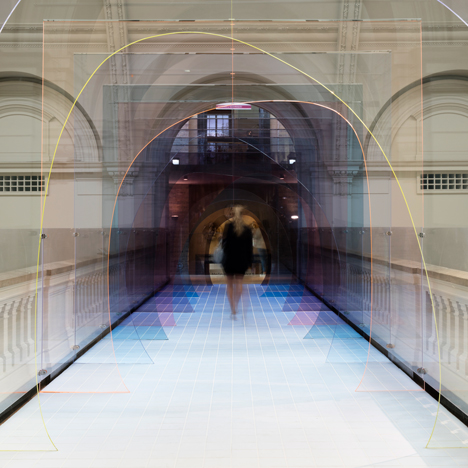 Photography is by Stéphane Bourgeois.