Big rectangular openings dot the concrete facade of Ha Long Villa, and each one contains a tree.

The Ho Chi Minh City studio, which won Architect of the Year at last year's Dezeen Awards, wanted to give residents the experience of living in nature.

"We have designed a sustainable home that exists in harmony with the surrounding environment and seeks to become part of its landscape," explained the studio, which also goes by the name VTN Architects.

"The main concept of the house is to create space where people can live in a forest."

The building is one of many new homes that have been constructed on Ha Long Bay, as Vietnam's coastline continues to experience a tourism boom. The bay is one of eight UNESCO World Heritage Sites in the country.

VTN Architects hopes this house, which is part-building and part-landscape, can serve as a reminder about the importance of maintaining a balance between the two.

Ha Long Villa is pentagonal in plan and contains six storeys. These are connected by a staircase that spirals up around the perimeter.

Planting boxes are slotted into the gaps between different sections of the staircase, creating plenty of space for the trees to grow.

Window openings align with the trees, allowing room for the branches to grow out.

Creating this "buffer zone" around the exterior of the building has other benefits too – it helps to naturally cool the interior without the need for air conditioning.

"This buffer space between the interior and exterior spaces protects the house against the hot climate and noise."

The architects chose wood-textured concrete for the exterior wall, to give the building a natural, rock-like aesthetic.

Inside, this textured surface is swapped for more traditional domestic finishes, including wooden floors, smooth-rendered walls and curtains.

Living spaces can be found on the two lower levels, while bedrooms occupy the second, third and fourth floors. The fifth floor contains a garden where residents can grow their own vegetables.

"These distinctive spaces offer residents options in their daily lives, like whether to dine inside or outside on a particular day," said VTN Architects.

Ha Long Villa forms part of the series House for Trees, a collection of tree-covered houses that VTN Architects has been building across Vietnam in the past decade.

The first House for Trees, completed in 2014, featured a series of concrete blocks that looked like oversized pot plants. Others include the geometric Binh House and the multi-level Ha House. 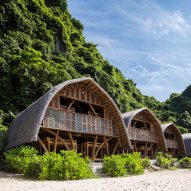 "Due to the simplicity in the concept, the idea of 'House for Trees' can be multiplied almost anywhere in tropical climate regions," said VTN Architects.

"The aim of the series is to bring green spaces back into the city."

The studio has completed a whole host of other projects recently, which led to it being named architect of the year at Dezeen Awards 2019. Highlights include Castaway Island Resort and bamboo cafe Nocenco.