In his final contribution to Virtual Design Festival, video blogger and architect Martin van der Linden reveals that he and his team often feature in the photographs of their completed projects.

"Architecture is space created for human activities," he explains in the video, which is one of the highlights he has selected from his popular YouTube channel One Minute Architecture.

"As architects, we imagine these activities through the creation of spaces: first in our head and then on paper as sketches, evolving into ever clearer impressions of what the space is about to become," he adds. "At the end of the project, we usually take pictures, as a testimony of our process." 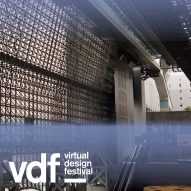 According to van der Linden, who runs Tokyo architecture firm Van Der Architects, the architects behind the project often appear in the photographs of the building when it is finished.

"We ourselves appear in these pictures as a fleeting testimony of the process that we went through," he says over video footage of his team acting as models during a photoshoot for one of his studio's projects.

Virtual Design Festival teamed up with van der Linden to present a selection of his best short architecture videos, which explore the urban and architectural landscape of Japan.

Other videos published as part of the series include a tour of Kengo Kuma's new Olympic stadium in Tokyo, a video about Kyoto Station designed by Japanese architect Hiroshi Hara and a guide to Japan's Shinto temple gates.