Pioneering architect James Wines laments the predominance of digitally created forms in architecture and calls for more buildings that "reach out to people" in the first of a series of talks VDF is broadcasting in partnership with Friedman Benda.

Dezeen has partnered with Friedman Benda to broadcast a selection of the best conversations with leading artists, architects and designers in its Design in Dialogue series as part of Virtual Design Festival, publishing one a week throughout May and June.

Artist and architect Wines rose to prominence for his practice Sculpture in the Environment (SITE)'s groundbreaking projects in the 1970s and 80s, including a series of avante-garde stores for the Best retail chain, which Wines describes as a fusion of architecture and public art.

"A bunch of under-endowed macho men built this world."

The monotony Wines detects in contemporary architecture is partly due to a lack of imagination and a culture of one-upmanship among developers, according to Wines.

"It's all these mega towers and hyper-vanity by developers," he said. "I think it's a bunch of under-endowed macho men who built this world."

But he also laid the blame on architects' dependence on computer-aided design (CAD) software and the architectural forms the technology leads them to create.

"We are swamped by the exotic shapes you can make with a computer," he said. "It's become another cliche – you're building some wiggles or convolutions that show you can use your computer well."

Although technology has advanced significantly since Wines founded SITE in New York in 1970, he believes many of the forms that architects are producing today are dated.

"They are using a computer to create shapes that were popular in the 1950s," he said, drawing comparisons between the forms of many contemporary buildings and abstract sculptures by artists such as Henry Moore and Antoine Pevsner.

"Sculptors were making these organic shapes. Why are you using a computer for this reason? I always wonder why architects today aren't – as the architects of the industrial age were – influenced by the imagery of their time."

"There is a radical need for buildings to communicate."

Architects' preoccupation with form has led, according to Wines, to bland, inert public spaces with which people are unable to properly connect.

"People have lost their identity in the environment, they are kind of herded like sheep through public spaces," he said. "There is a radical need for buildings and spaces to communicate."

Wines made the comments while giving a short presentation titled Architecture as Critical Commentary in the Design in Dialogue session, each of which takes the form of a video conference call with Adamson and a small invited audience.

"I am very interested, and always have been, in how buildings and public spaces actually reach out to people," Wines said

"Having lived in Rome, I was very aware that the environment spoke to me and I spoke to the environment. We had a discourse and that isn't always true of buildings today," he continued.

"To what degree can architecture, public space and landscape design serve as conduits for social, psychological, political and contextual messages?"

Wines presented a selection of SITE's work spanning public art and architecture, which he said attempts to engage the public in a dialogue, including the practice's iconic series of Best stores.

SITE designed nine stores for the catalogue showroom chain, which drew attention to and made fun of the bland, boxy form of most out-of-town retail outlets in America.

One of the most well-known stores, located in Houston, Texas, featured a brick facade that seemed to be falling apart. In another store, in Towson, Maryland, the whole front facade was tilted, as if it had been lifted off the building. 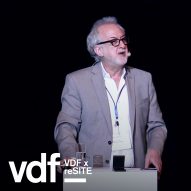 Large openings in the facades of stores in Miami and Milwaukee revealed the inner structure and services of the buildings, while trees appeared to grow through another store in Richmond, Virginia.

"It's kind of a critique of architecture, basically, saying that buildings in process, in evolution, are far more interesting than when they are finished," Wines said.

"I think with any art, it's what invades it from the outside that makes it interesting. If you're only interested in form-making and shape-making – that's great if it's done beautifully, but I always liked the idea of some kind of inversion, where it made you think about something else."

"The highest compliment I ever received was when someone would come up to me and say: 'I never thought about a building before'. So that was the idea. To activate some kind of dialogue. So communication became the big event."

According to Wines, it was the founder's appreciation for art that meant they saw the value in poking fun at their own business.

"People often ask me why Best allowed you to do that, but they were big art collectors, and actually a lot of our clients were art collectors, so they already understood that doing something self-effacing in the public domain actually won customers," he said.

"It didn't repel them, it won them. And it's amazing that more commercial people don't realise that."

Returning to the present day, Wines acknowledged that the coronavirus pandemic will have a huge impact on the built environment and that, in particular, social distancing measures may mean that the kind of public spaces he enjoys may become harder for architects to create. But he urged architects to move on from their preoccupation with form.

"Now we have shapes, endless shapes," he said. "Try to think of something else. Take another approach. What else can you express that is more interesting? That is my message, basically."

Wines' conversation with Adamson is the first in a series of Friedman Benda's Design in Dialogue talks we are broadcasting as part of Virtual Design Festival.

Other designers featured in the series include Ron Arad, Faye Toogood and Misha Kahn.