Coronavirus will lead to a rise in escapist restaurant interiors, while physical menus, cash payments and buffets will largely be abandoned, according to a trends report by Dubai-based studio Roar.

Roar, which is led by Pallavi Dean, worked with 170 industry professionals, as well as a focus group of nine experts, to predict ways that the Covid-19 pandemic will change the design of restaurants.

The report aimed to distinguish the short-term impacts from the long-term trends that will be seen in future dining experiences.

Restaurateurs "know there will be fewer people dining out"

Using original and escapist design to create "slightly surreal" and special experiences in restaurants could be "the lasting design legacy of the pandemic," said one panelist.

"Restaurateurs are not really asking for new spacing – but they are pushing for more originality," read the report.

"They know there will be fewer people dining out, so they are asking us to challenge the briefs they have given us, and asking for more originality."

Another panellist predicted that a new form of architectural modernism would arise. The mid-century design style is interpreted by some historians as a response to early 20th-century health crises such as cholera, typhoid and flu.

It included "the embrace of simple lines, strict geometries and modern materials, and the rejection of ornamentation such as intricately carved wooden furniture that collected dangerous microbes."

It is possible that the current pandemic could give birth to a similar transformation in building design, predicts the report.

The forecast suggests that we will see more open kitchens after the pandemic, as they promote "transparency". Surfaces built or clad in anti-microbial materials will also "be a given".

"Anti-microbial surfaces are not new to the foodservice industry – but some designers observed that they are sometimes value-engineered out of the final build specification for restaurants," read the report.

"Panelists broadly agreed that this will no longer be the case."

The three trends that Roar headlined as the most significant in the future of dining were layout and spacing, contactless dining and food concepts.

Restaurant spacing restrictions will be "severe but short-lived"

Roar founder Dean, who is a judge at this year's Dezeen Awards, thinks layout and spacing restrictions will be "severe but short-lived".

According to the report, more than a quarter think spacing in restaurants will return to normal later this year. However, most predict that social distancing measures won't be left behind until early 2021.

While many might think the second forecast of contactless dining is "a given", in reality it is more nuanced, argues the report, as nearly half of survey respondents voted that it is "a passing fad".

Instead of contactless, Roar uses the term "contact-light", which would see physical menus and cash payments become rare "if not extinct", alongside communal condiments like salt and pepper. 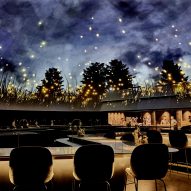 Restrooms is where the most change will be seen. Referred to as "a vital battleground in the war against infection", the report imagines that most bathroom doors will be removed except from private cubicles, and those that remain will be open and closed by foot or via wireless sensors.

"Customers will rarely, if ever, touch a tap"

"Japanese-style robot WCs (replacing a new piece of paper over the seat after each visit) will go from novelties to must-have, although in the interim a packet of Dettol wipes may have to suffice," reads the report.

"Customers will rarely, if ever, touch a tap, soap dispenser or hand dryer again. All this technology already exists, it's simply a case of using it."

In terms of food concepts, the report predicts that buffet and sharing-style forms of eating "cannot survive in their present form."

Many of these trends, from increased automation and the death of buffets to an increasing demand for escapism concepts, had already begun pre-pandemic, argues the report.

The pandemic will simply accelerate these design trends that were already in play.

Roar founder Dean – who featured in Dezeen's VDF launch movie – created the report with the help of eight other industry professionals, including founder of Gates Hospitality, Naim Maadad, partner at Flip International, Jamal Wick and founder of The Free Spirit Project, Briar Jacques.

Other participants include Paul Bishop from Bishop Design, Isabel Pintado from Wilson Associates, Georgy John from Gastronomica, David McAdam from the Middle East Council of Shopping Centers and Samantha Wood from FooDiva.

London studio Bompas & Parr also predicted a series of design and lifestyle trends that will emerge both during and after the Covid-19 pandemic, from virtual spas to an increase in DIY creativity at home.

Once the main impact of the virus is over, the studio predicts a rise in haptic museums, to get people used to touch again, and a continued obsession with hygiene and hand-washing.