The collection is a collaboration between the two young designers who graduated from Cornell University in May 2019 and went on to found their own practices.

Musca and Han teamed their skills to design the angles, size and proportions that make the monolithic forms. They are intended to draw on the style of brutalist architecture, which emerged in Great Britain in the 1950s.

Each of the pieces is first modelled using digital software and then built as a basswood mould. Inside these, Musca and Han then pour and cast the forms using glass-fibre reinforced concrete.

Designs include Rockito, which is intended as an abstract take on the traditional rocking chair. The design features a sharply curved seat decorated with eight voids of various sizes.

The similarly designed Rocker chair has a tall upright back and rounded base. Thin triangular and rectangular cutouts accent the sides of the piece, which is staged in a digitally rendered forest of angular concrete columns. 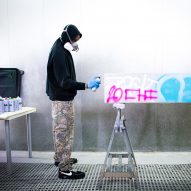 Images of the works present them in an environment that complements its design. Some of the settings are digitally rendered scenes created by Han, while others are photographed in actual locations such as Griffith Park in Los Angeles.

"The goal is to create things that are practical and useful without sacrificing beauty and sleekness," the pair told Dezeen. "These are extremely versatile designs that play well with other styles in all sorts of settings."

Two geometric holes form the tilted back and flat seat of the Kink Chair. The designers placed the furniture against a visualised wall of jagged concrete blocks.

In addition to the collaborative collection with Han, Musca independently designed several benches placed in Overlook Park and Rise Park in Irvine, California.

The designs have a flat top and clunky triangle-like legs and are carved with the name Cassius Castings.

Musca's X-Tendo Bench photographed on the wooded Griffith Park overlook has narrow slits along its top edge. Its legs are composed of a crisscrossing structure.

Other works that use the material include a series of sculptures by Brandon Clifford that references megalithic architecture and a chair by Bower Studios intended to look like it is melting.

Photography is by Duyi Han.