American designer Brandon Clifford has drawn inspiration from megalithic architecture to create concrete sculptures that join together like a jigsaw puzzle.

Clifford is a partner at Matter Design, a Boston studio known for a range of experimental projects that challenge convention. In a recent talk given at the TED conference in Vancouver, Clifford presented two of his recent projects – Walking Assembly and Janus, both of which are concrete sculptures that "demonstrate the potentials of moving mass with joy".

The performative sculptures have been developed in collaboration with CEMEX, a multinational building materials company.

Monuments such as Stonehenge and the giant statues on Easter Island have inspired Clifford's recent work.

He is particularly interested in how massive, ancient structures were constructed and moved around – a process that could help make current construction practises more performative and entertaining, according to Clifford.

Walking Assembly is a puzzle-like sculpture that consists of multiple pieces that interlock and form a wall and little stairway. The sculpture was unveiled this spring at CEMEX's global research lab in Brügg, Switzerland.

Together, the concrete components weigh 13,162 pounds (5,970 kilogrammes) and measure approximately 20 by 10 feet (6.3 by three metres). The pieces are easily moved around by humans and set into position.

"Intelligence of transportation and assembly is designed into the elements themselves, liberating humans to guide these colossal concrete elements into place," Clifford said in a project description.

The geometry of each piece was determined by two factors – the ability to roll and spin while touching the ground, and the ability to be nested within other pieces. 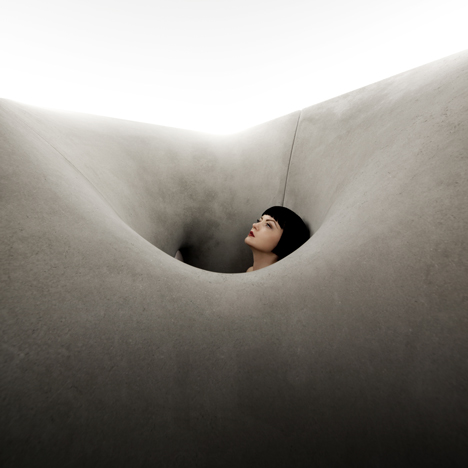 The components are made of large concrete blocks, called massive masonry units (MMU). To ensure steady movement, Clifford and his team used varying densities of concrete. They also carefully positioned the centre of mass in each unit.

The sculpture is meant to demonstrate the possibility of erecting structures without the use of cranes, while also "turning our building sites into spectacles of play".

Walking Assembly builds upon an earlier piece by Clifford – Janus, an anchor-shaped sculpture that consists of a solid round ball topped with a curved handle.

Named after the Roman god of thresholds, the sculpture can rock back and forth without tipping over, despite weighing 4,400 pounds (2,000 kilogrammes).

Designed using the computer program Rhinoceros 3D, Janus rises to a height of 7.4 feet (2.25 metres). Similar to Walking Assembly, the team used variable density concrete – along with carefully siting the centre of mass – to keep the sculpture upright.

"The precision of the concrete density enables us to make forms do things they should not do without that variable density," Clifford told Dezeen. "Obviously, Janus would fall over if it were not cast with that intelligent concrete."

The concrete was cast in a special mould created by Odico Construction Robotics using a CNC (computer numerical control) machine. The sculpture is kept in its formwork while being transported to different sites.

Janus was presented in 2018 at the American Academy in Rome on the hill of Janiculum, where the mythical god watched over the city. It was later shown at the Massachusetts Institute of Technology (MIT) – where Clifford is a professor – and was accompanied by a modern dance performance by Terez Lowry.

During the presentations, the sculpture arrived in a box covered in pastel-toned graphics that reference the Arch of Janus. The box was peeled away, allowing the bulbous sculpture to spring to life via a release mechanism.

With the soft touch of a human, Janus rocked back and forth, eventually assuming an upright position. Music by composers Federico Gardella and Simone Conforti complemented the performances.

Clifford discusses the designs in this recent TED talk

The sculptures are the latest explorations into form and materials by Matter Design. Other projects by the studio include the Five Fields Play Structure – a playground in Massachusetts made of intersecting, wood-clad elements that encourage kids to crawl, jump and even fly.

The firm also designed a "condensed concrete spa" called Microtherme. Presented as part of a 2015 exhibition in Boston, the installation consisted of a large wooden box with curvy interior walls that radiate hot and cool air.

Photography is by Matter Design.