In the last of our three exclusive video interviews for Virtual Design Festival, Iris van Herpen describes how she created the optical illusions in her Hypnosis collection, which includes a dress the Dutch fashion designer describes as her most complicated yet.

Van Herpen is known for her elaborate haute couture fashion. For her Fall 2019 Hypnosis collection, presented at Élysée Montmatre in Paris during the city's fashion week, she produced dresses made from tens of thousands of rippling pieces of fabric, each cut to just 0.8 millimetres wide.

"What I hoped is that you really couldn't see where the garment begins and where the skin ends," she said in the video.

Van Herpen describes the collection, which she developed together with architect and long-time collaborator Philip Beesley, as a series of optical illusions.

"The patterns are cut so finely that it moves faster than your eye can follow," she said. "So it has a really delicate interaction with tiny movements of the body and creates an optical illusion when you walk in it."

"His sculptures create an optical illusion that is quite infinite and that was also the inspiration behind that collection," she said. 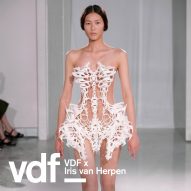 Constantly moving, the sculpture was made from multiple metal stems that protrude from a central circular structure that the models passed through as they walked the runway.

The stems featured layers of round discs covered in silk, which slowly rotated, resulting in a pulsating visual trick.

"When they move you can't really tell whether they go forward or backwards," Van Herpen explained. "The whole sculpture starts breathing. It's a continuous expansion and contraction."

Mirroring the look of the Omniverse sculpture, Van Herpen and Howe also collaborated on one of the show's statement pieces, titled the Infinity dress.

"I think it's the most difficult dress we ever made," Van Herpen stated.

A white dress covered with a layer of feathers was surrounded by a revolving aluminium and stainless steel skeleton embroidered with white feathers, powered by a mechanism in the back of the dress.

"I wanted to created that balance where nature always needs to be in dialogue with the technology," van Herpen said.

This video was filmed by Dezeen at Van Herpen's Amsterdam atelier. It is the third and final video in a series exploring the pioneering fashion designer's work, for Virtual Design Week.

Virtual Design Festival, the world's first digital design festival, runs until 30 June 2020. It is a platform that will bring the architecture and design world together to celebrate the culture and commerce of our industry, and explore how it can adapt and respond to extraordinary circumstances.