In the second of our three exclusive video interviews with Iris van Herpen for Virtual Design Festival, the Dutch fashion designer explains how working with architects has informed her approach to textile design and led to her working on a full-scale museum extension last year.

Van Herpen is known for creating elaborate, sculptural couture fashion collections. She often collaborates with architects to help her develop the unusual materials and techniques she uses in her designs.

"In a way, the knowledge that lies within architecture is very useful for material development on the smaller scale," she said in the video, which Dezeen filmed at her atelier in Amsterdam earlier this year. "So really translating techniques on the larger scale into fine textures or fabrics."

Van Herpen was one of the first fashion designers to pioneer the use of 3D printing in her collections, a technology that was introduced to her by the Amsterdam studio Benthem Crouwel Architects.

"They were using 3D printing for their model making and I was really fascinated by the intricacy in detail," Van Herpen said.

For her Crystallization collection in spring 2011, she worked with Benthem Crouwel Architects alongside architect Daniel Widrig to create a series of dramatic 3D-printed garments.

She followed this up with an entirely 3D-printed skeleton-like dress as part of her Capriole collection in autumn 2011, which was created in collaboration with architect Isaïe Bloch.

Van Herpen has continued to use 3D printing in her work ever since, such as her Voltage collection in 2013 and her Magnetic Motion collection in 2015. She has also collaborated with Rem D Koolhaas to create a pair of 3D-printed high heels reminiscent of tree roots.

However, Van Herpen said that more recently she has used the technology to create softer materials that behave more like traditional fabrics. 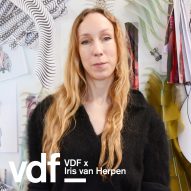 "When I started with 3D-printing, I was using it very much the way an architect would be using it but now the knowledge of fabric making is really implemented in the way we work with a 3D printer," she explained.

For her spring 2018 collection, she collaborated with the University of Technology in Delft in the south of the Netherlands to create a dress made from leaf-like patterns, which were 3D-printed directly onto a tulle fabric.

Van Herpen also has a longstanding collaboration with Toronto-based architect Philip Beesley, who has developed materials for several of her collections such as her Between the Lines collection in 2017, which included dresses made from a thin mylar fabric that creates an optical illusion when it moves.

Van Herpen's collaborations with architects have not only influenced her fashion design, but also led to her contributing to buildings.

In 2019, she worked with Neutelings Riedijk Architects to wrap their design for the extension of Leiden's Naturalis Biodiversity Center in sculptural, three-dimensional panels.

Each of the 263 panels, which wrap both the inside and the outside of the building, were moulded from concrete and small-grained white marble aggregate in order to simulate a texture that is reminiscent of fabric.

"I wanted to add some softness to the building and of course I can't bring in the softness of my work into a skill like that but I did want it to look as soft as a garment," she said.

Van Herpen does not just collaborate with architects. She has previously collaborated with experts from a host of different disciplines. She also frequently collaborates with artists and designers for her runway shows.

For her autumn 2018 collection she worked with Studio Drift on a kinetic sculpture mimicking the motion of a birds wing in motion and in 2019 she collaborated with American sculptor Anthony Howe on a hypnotising sculpture for her Fall 2019 collection.

This video was filmed by Dezeen at Van Herpen's Amsterdam atelier. It is the second in a three-part exclusive series exploring the pioneering fashion designer's work as part of Virtual Design Festival.