American firm Malcolm Davis Architecture has placed skylights over existing wood framing to streak the interiors of this San Francisco house with beams of light.

Malcolm Davis Architecture was enlisted to renovate the residence located in Noe Valley, a neighbourhood in the California city known for its streets lined with Victorian and Edwardian style homes.

Called Noe Valley Residence, the project maintained many of the house's traditional elements, including its bay window and beige stucco facade to preserve its connection with the neighbourhood.

To modernise and expand the house, the firm added large glass windows and a rear extension that spans two levels to the rear of the house. It joins a number of projects in the city that have traditional fronts and contemporary extensions in the back.

"The goal of this Noe Valley renovation and expansion was to maintain a connection to the neighbourhood context, while maximising access to daylight, the garden and the views beyond," the studio said.

"Reinterpreted and expanded in a modern vocabulary, the house is now a relaxed and inviting family home." 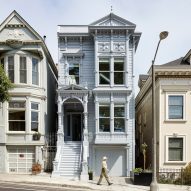 Grey lap siding lined with a row of windows covers the upper portion of the rear facade. Vertically laid cedar wood clads the rear extension that juts out from the ground floor of the existing structure.

A deck on top of the wood addition is fronted with four panes of glass that form a railing facing the grassy backyard, which is divided into several small courtyards and patio spaces.

Along the northern side of the house, the studio placed a series of skylights over existing wood framing that was repurposed and left exposed. Light streams through the gaps between the beams to project a pattern of diagonal stripes against the interior walls.

In the kitchen, the white walls and cabinetry are contrasted by the ceiling clad with cedar wood planks. The large white island at the centre of the room is also lined with a row of the wood slabs on one of its faces.

Similar cedar accents feature in other parts of the house including as a decorative wall in a bedroom and on the built-in coat rack in the entry hall.

Other elements of the design include a thin desk and shelving unit built into a small alcove, a black textured fireplace and pair of sliding glass doors that open to the wood deck overlooking the backyard.

Malcolm Davis Architecture has completed a number of projects in California such as a holiday home formed by two cedar volumes and a house in Silicon Valley that embraces its natural setting.