Dutch designer Maarten Baas has created a short satirical movie set in a future where Western society has suffered a dramatic decline and his works are found gathering dust in his warehouse.

The film, set "Somewhere in the future, somewhere in Western Europe" according to the opening titles, shows pieces from Baas' career including his Sweeper Clock and Smoke collection sitting on warehouse shelves.

"At the dawn of the 21st century, Maarten Baas was internationally recognized and celebrated as one of the world's most influential designers," says the voiceover.

"His work graced the collections of prestigious museums such as the Victoria & Albert in London and the MoMA in New York at a time when these leading capitals were physical manifestations of a rich and successful Western society". 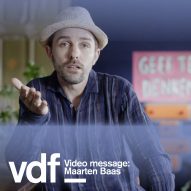 "Maarten Baas himself was once a symbol of this time of conspicuous wealth and freedom, his warehouse a vivid epicentre of artistic activities," the narration continues.

"Today, artworks that used to break records at auctions are now only catching dust. They're silent witnesses to the limitless opulent world from the past."

The movie ends with a closing title that says: "Let's reset".

The film follows the video message Baas filmed for Dezeen's Virtual Design Festival, which saw the designer explaining how he is faring during coronavirus lockdown.

"This is how I cope with the situation," Baas says in the movie, which features various shots of him pondering what to do.