The Dutch designer was joined by the founder of the Dutch furniture brand Lensvelt, Hans Lensvelt, and spoke to Dezeen's founder and editor-in-chief Marcus Fairs about his work for the brand.

The conversation between Baas, Lensvelt and Fairs was a part of a series of Screentime talks exploring the Lensvelt brand and its relationship to some of its design collaborators.

Baas first collaborated with Lensvelt in 2017 when they launched a collection of chairs at Salone del Mobile featuring irregularly shaped backrests, which will be featured in the VDF products fair.

Based in Amsterdam, Baas became known for his graduation project Smoke, a collection of furniture that had been scorched with a blowtorch.

Baas has since gone onto design a number of products, installations and video-based projects such as the permanent timepiece installed at Amsterdam's Schiphol Airport, Real Time Schiphol, which features a video of Baas painting and repainting the hands of the clocks for 12 hours straight.

The designer has also previously designed a collection of brass furniture that resemble simple sketches of furniture.

The talk was part of a wider collaboration with Lensvelt for Virtual Design Festival which included three Screentime interviews with designers Joep van Lieshout and Fabio Novembre, both of which have designed products for the brand.

Van Lieshout has designed a variety of products for the brand including a sofa system with sliding backrests, entitled the AVL Glyder.

Also being published in the VDF products fair is a range designed for the brand by Novembre entitled New Balance, which comprises a sofa system and armchairs that are designed to look askew. 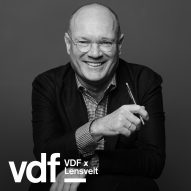 The first interview of the series featured a conversation between Lensvelt and Fairs about the history and design philosophy of the brand.