Recycled plastic and rubber make up this unisex trainer by Belgian brand Norm, which has set out to change the "nonsense" manufacturing process of a standard pair of shoes.

Norm's 1L11 trainers, which are available in white, black, navy, red and khaki-green, have been made to have a carbon footprint of 6.5 kilograms – approximately 80 per cent less than a typical pair of shoes.

The brand achieved this figure by almost exclusively using recycled materials to make the shoe and its packaging, in addition to cutting back on transportation during the manufacturing process, which Norm is carrying out solely in Europe.

The upper part of the 1L11 model is 3D knitted with yarn made from recycled plastic bottles – six bottles are used per pair of trainers.

A knitted upper was specifically incorporated in the shoe so that, if damaged, the wearer can simply use a needle and thread to repair it.

In a bid to reduce waste, the upper is also made as one single component instead of several pieces that would typically have to be cut and stitched together.

The trainer was created after the brand's three founders – Nicolas Lavigna, Antoine Bodart​ and A​rnaud Vanderplancke – struggled to find shoes that are "holistically sustainable".

According to the trio, the footwear industry produces over 23 billion pairs of shoes per year, with each pair emitting the equivalent of 32 kilograms of carbon dioxide during the course of its life cycle.

"[Brands] only used recycled polyester canvas, without thinking of the other components, and were producing [shoes] on the other side of the planet... it was nonsense," Lavigna told Dezeen. "So we decided to do something ourselves."

Recycled plastic bottles have been employed to make other details on the shoe such as the tongue label and dashed, hiking-style laces.

A mix of 70 per cent recycled rubber and 30 per cent natural fair-trade rubber is then melted down and injected into moulds to form the outer sole, which is attached to the shoe with a water-based glue. 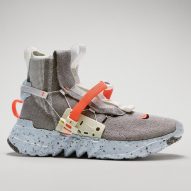 The inner sole is made from recycled foam.

The brand has also partnered with Belgian organisation Graine de Vie, which plants two trees for every purchased pair of 1L11 trainers.

Norm joins a growing wave of footwear companies that are attempting to make more eco-savvy shoes.

Earlier this year, Nike released its Space Hippie range, which it claims has their "lowest carbon footprint scores ever".

The shoes are crafted from scraps taken from the brand's factory floors and other recycled materials such as plastic water bottles and T-shirts.

In 2019, Native Shoes also unveiled its compostable Plant Shoe, which is made from components such as eucalyptus, pineapple husk and dried hevea milk.