Architects Peter Cook and Dennis Crompton discuss Archigram's influential concept for an elevated city of capsule homes in the second instalment of our exclusive video series with the radical architecture group for VDF.

Developed between 1963 and 1966, Plug-In City is a conceptual city comprising personalised pre-fabricated homes that are inserted into high-rise megastructures.

"It was done at a time when our day job was including prefabricated housing components," said Cook in the video, which Dezeen filmed in London and is sponsored by Enscape.

"It was looking at prefabrication and saying: 'Come on, this doesn't have to be boring. It can be quite romantic and quite exciting.'"

Plug-In City "allowed people to grow their dwelling with themselves"

Archigram developed a number of different Plug-In City designs, with each comprising the same basic components.

"It developed over about three years, actually," said Cook. "You stick up a megastructure that contains the access systems, diagonal lifts, and the servicing elements that bring up food and water and take out rubbish and so on."

"You then add to that a substructure that can carry pre-fabricated dwellings that we call capsules."

The concept aimed to give people more flexibility and choice in the design of their home, allowing them to customise the capsules and easily replace them when required.

"Plug-In City was a method of allowing people to grow their dwelling with themselves," said Cook. "[The capsules] vary in size, but also can be replaced, so you're getting a lot of variety and change."

As well as hosting private homes, the architects envisaged the megastructures featuring a host of elevated public spaces.

"Unlike traditional, existing cities – which are basically two-dimensional with buildings extruded up from the ground plan – we were looking at an alternative way of putting a city together, where it would be possible to have open spaces at upper levels," explained Crompton. 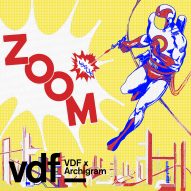 "At first, almost nobody took any notice of Archigram" says Peter Cook in exclusive Dezeen interview

"So it lifts the city off the ground and it enjoys space in a different way, because there are certain pieces of enclosed space that then become public areas," added Cook.

"The megastructure that you hold the dwellings on can start to sprout up and become relatively high-rise and contain more public open spaces inside it."

Archigram explored emerging technologies and consumer culture of the 1960s

Founded in 1961, Archigram was an avant-garde collective of architects that became famous in the 1960s and 1970s for its radical architecture concepts.

As part of Virtual Design Festival, Dezeen is publishing  a series of exclusive interviews with former Archigram members Cook and Dennis Crompton.

In the previous instalment of the series, Cook explained the origins of the group and how it rose to prominence through a series of self-published magazines.

Like many of Archigram's most influential projects, Plug-In City combines an interest in the emerging technologies and consumer culture of the 1960s with the language and aesthetics of comic books and science fiction.

"It has all sorts of implications for growth and change, which I think was very contemporary with that period," Cook said.

It is the second in a series of video interviews we are publishing this week as part of Virtual Design Festival.