Californian firm Ryan Leidner Architecture has used bright white paint and lush greenery to refresh a mid-century modern Eichler home in Silicon Valley that was completed in the 1960s.

The Twin Gable House in Sunnyvale, California was constructed in 1962 by the design duo A Quincy Jones and Frederick Emmons for post-war real estate developer Joseph Eichler. It is one of over 10,000 modernist subdivisions that Eichler developed following the second world war.

Originally called Plan OJ-1605, the property has been remodelled several times since it was first built. For this renovation, Ryan Leidner Architecture updated the 2,200-square-foot (204.3-square-metre) space with white interiors and an open floor plan for a family of four.

"A primary goal of the renovation was to peel back the many layers of remodels that had occurred over the previous decades," the studio said.

The low-lying house is now named after its two pitched roofs that are painted a bright white. They contrast the red cedar strips that were added to replace the original grooved plywood siding on the facade, which also features a carport accented by glazed walls.

Large sliding glass doors and windows face into a lush garden landscaped by Stephens Design Studio, which includes the existing courtyard and a new swimming pool.

The courtyard is one of a series of existing architectural elements the team preserved during the project, along with the post and beam structure that spans the ceilings. 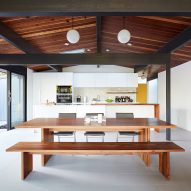 Inside, the studio removed several walls to adjust the flow of the layout and create an open-plan living area. Plaster walls were smoothed and repainted a bright white, along with the wood beams and frames that span the ceiling.

Square porcelain tiles cover the flooring throughout the house and continue onto the outdoor spaces.

Ryan Leidner Architecture removed dated furnishings such as the shag carpets and old cabinetry for the interior decor. In the kitchen, Carrara marble counters and backsplash are now paired with white oak accents used to detail the cabinetry.

Furnishings include a set of wood Eames lounge chairs in the living room and a bedroom side table designed by Eero Saarinen.

Ryan Leidner Architecture is a San Francisco studio, it recently completed the renovation of a 19th-century residence house in the city's Mission district.

California studio Klopf Architecture has also remodelled a number of Eichler model homes including a house in Palo Alto with yellow accents and architect Michael Hennessey updated one of the mid-century modern homes in San Francisco.