A huge arched window punctuates the grey-brick exterior of an education centre built by Adam Richards Architects in the grounds of a 16th-century castle in the English town of Deal, Kent.

The learning centre designed by Adam Richards Architects is the first significant building to be added to the English Heritage-listed Walmer Castle and Gardens site in 145 years.

Nestled amongst eight acres of verdant grounds, the castle was erected between 1539 and 1540 to serve as an artillery fortress.

From the 18th century onwards it became living quarters for figures such as Winston Churchill and the Duke of Wellington – whose life and career is now documented in the exhibition rooms inside.

The learning centre will cater to the 3,000 education visitors that come to the castle every year. Up until now, school pupils and groups of older learners haven't had a dedicated on-site space for activities.

"Designing a contemporary building for a historic site like Walmer Castle is the sort of thing our practice loves doing," studio founder Adam Richards told Dezeen.

"In briefing us for the project, English Heritage was both ambitious and cautious, so we're delighted with the outcome." 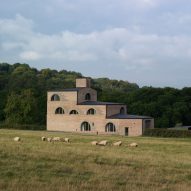 The centre comprises a pair of grey-brick volumes with peaked roofs made from blackened zinc, which together perch on a sand-blasted concrete plinth.

These materials were specifically chosen by the practice to match the "brooding quality" of the adjacent castle.

Exposed aggregate in the plinth is also meant to be a subtle visual nod to the shingled beaches along Deal's coastline.

The south-facing facade of the larger volume features an arched picture window, which is meant to mimic the form of the castle's gun ports.

"It frames a view of the picturesque, cloud-shaped double row of hedges bordering the kitchen garden, making the garden the focal point of the space," explained the practice.

The building is accessed via a forest-green entryway where there are toilets and rows of wooden hooks where visitors can hang their coats and bags.

It leads through to the main activity room, where there are work tables and a white-tile wash area where children can clean up after messy craft sessions.

A cafe that was also created by the practice takes over an adjacent timber-framed greenhouse.

This backs onto another new zinc-clad building that accommodates a kitchen, plant room and additional toilet facilities.

Part of the project, which was backed by The National Lottery Heritage Fund, also required Adam Richards Architects to devise a connection between the main grounds of the castle and The Glen – a planted chalk quarry nearby that has been inaccessible for the past century.

Visitors to Walmer Castle can now head down to the quarry using a new zig-zagging flight of stairs crafted from galvanised steel and oakwood.

Adam Richards Architects was established in 2002. Previous projects include the refurbishment of the Ditchling Museum of Art + Craft, where they added a series of pitched-roof volumes, and the creation of a home in Sussex, which features a curved outer wall made from recycled clay tiles.

Late last year, construction work finished on Adam Richards' own home in Petworth. The property boasts a series of grand concrete rooms that nod to the storyline of post-apocalyptic film Stalker.