Flora, Telares, Colors and Silhouette are the names of the four rug ranges that make up Nanimarquina's 2020 range.

Flora was created in collaboration with Barcelona-based artist Santi Moix, who uses imagery of flowers to explore the fragility of life and death.

"His use of colour is beyond the merely decorative: it enhances and accentuates certain details paying special attention to in-betweens – those intermediate processes in flowers like the moments before their birth, their explosion of colour, and their decay," said Nanimarquina.

There are three hand-tufted rug models available – Promenade, which boasts a jumble of brightly-hued florals, and Backyard, which depicts the wildflowers typically found in a home's garden.

These rugs are smaller and were designed to be set against the monochromatic rugs in the Colors range.

Afghan wool has been handwoven at various intensities to create the textured rugs in another range, called Telares, which are meant to reflect the "authenticity of craftsmanship".

"The changes in the pattern, which are born from the tension applied between weft and warp, give the rug an appearance full of nuances, thus evoking the most primary manual work: the insistent trial and error process of the craftsman," the brand explained.

They can be produced in five different colours – Ebony, an almost-black, Carmine, a rich red, Indigo, a deep purple, Fog, a dusky beige and Pine, a forest-green.

The next Colors range comprises plain block-colour rugs that are meant to offer an "abstract interpretation" of hues seen in nature.

They come in four shades – Nectar, a warm yellow, Blush, a deep pink, Saffron, a strong red and an earthy green called Basil.

Each one is finished with a fringed edge, riffing on the style of South Asian dhurries – thin woven rugs that can be used as floor coverings, bedding or packaging.

The fourth and final range, Silhouette, was designed in partnership with Jaime Hayon. The rugs can be used indoors or outdoors and boast spindly illustrations of imagined faces. 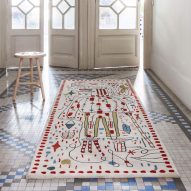 "It's a freehand drawing, similar to the work in my sketchbooks," explained Hayon.

Nanimarquina was established in 1987 and is based between Barcelona and New York.

Jaime Hayon is just one notable designer that the brand has worked with – in 2014, it joined forces with London studio Doshi Levien to create floor coverings that payed homage to traditional rugs crafted by tribes in India's Gujarat region.

This article was written by Dezeen for Nanimarquina as part of a partnership. Find out more about Dezeen partnership content here.