London practice Adam Richards Architects has refurbished a museum in the English village of Ditchling, adding pitched-roof structures to connect the buildings with a converted cart lodge containing a new entrance (+ slideshow).

Completed in late 2013, Adam Richards Architects' renovation of the diverse buildings that house the Ditchling Museum of Art + Craft was recently named as one of this year's RIBA Awards winners.

Situated on the edge of the village green in a collection of former school buildings, the museum is home to works by local early-20th- century applied artists, designers and sculptors including Eric Gill, David Jones and Edward Johnston.

The architects refurbished the old school buildings and renovated the listed disused cart lodge to create a new entrance, cafe and shop. 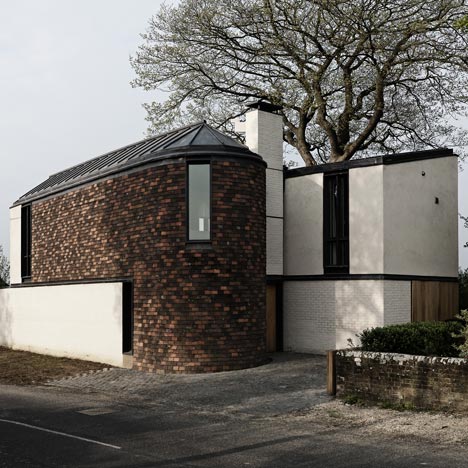 Two new structures were inserted between the cart lodge and school buildings to connect them and provide a new gallery and storage area.

"The aim was to create buildings and spaces that enter into a critical dialogue with the village and its history, the museum and its collection," explained the architects.

The larger of the new buildings is constructed from cross-laminated timber clad in black zinc panels with serrated detailing.

Adjacent to it is a smaller connecting building with a terracotta tiled exterior that offers a contemporary counterpoint to the roof of the neighbouring barn.

The museum's main entrance was shifted from its location by a nearby churchyard to the restored barn, with its original timber frame carefully preserved.

"The restored 18th century oak structure of the entrance building is re-cast as the museum's 'first exhibit', and on arrival its atmosphere sets the tone for visitors' encounter with craft, place and the idea of the past in the spaces to come," said the architects.

A door towards the rear of the barn leads to the linking building, which contains a staircase that ascends to the level of the gallery spaces and incoporates a narrow horizontal window looking out towards a nearby pond.

The zinc-clad structure contains artefacts displayed when the museum was founded in 1985, arranged on shelves covering one wall that can be seen through a large opening in the opposite wall.

This space leads to a main gallery dedicated to key works by the artists, which are displayed in vitrines and freestanding units including a dark structure with a profile that relates to the pitched ceiling.

At the opposite end of this space is a chapel-like gallery housing the museum's centrepiece, the Stanhope Press, which was used by Eric Gill – inventor of the Gill Sans and Perpetua typefaces – and his colleagues to print their graphic designs and literature.

The remaining spaces contain a reading room, learning area, offices and staff room. Furniture used throughout the building is from London brand Another Country's Series One collection.

Here is some more information from the architects:

Ditchling Museum of Art + Craft has reopened to widespread acclaim. The museum holds a nationally important collection of works by the artists who made this small village in the Sussex Downs a vital centre for the development of the applied arts in the early 20th century, such as Eric Gill, David Jones and Edward Johnston.

Adam Richards Architects was appointed for the museum's HLF-funded capital project after winning a limited competition in 2008, and subsequently developed designs at every level from site strategy to the detailed displays of the collection. In addition to new-buildings, the project was to restore, refurbish and tie together a disparate group of buildings (in the heart of a protected village in the South Downs National Park) and use the architecture and design to tell the story of the collection in a new and compelling way, whilst giving the museum state-of-the-art facilities of international quality. The aim was to create buildings and spaces that enter into a critical dialogue with the village and its history, the museum and its collection.

Planning consent was obtained for the careful conservation and repair of a disused listed barn on the village green to create the museum's new entrance, café and shop; the existing museum buildings in the old village school have been comprehensively refurbished to provide galleries, a reading room, a learning space and offices; and two innovative new buildings have been constructed from black zinc & tile-clad cross-laminated timber to link the above elements together, providing a new gallery and collection store.

The restored 18th century oak structure of the entrance building is re-cast as the museum's 'first exhibit', and on arrival its atmosphere sets the tone for visitors' encounter with craft, place and the idea of the past in the spaces to come. A 'pilgrimage' route through the building reveals the weaving together of old and new. The culmination of the museum is a gallery to house the Stanhope Press, which is placed at the end of a bright, chapel-like space. Workshop groups are able to use the press, animating the museum, and providing an echo of the lives of the artists and craftspeople who made this village unique. New windows in this gallery give a final view from the press to the South Downs, invoking the unity of landscape, craft & ritual that so inspired the artists who came to Ditchling.

The museum is shortlisted for this year's £100,000 Art Fund Prize for Museum of the Year. It has won national & regional RIBA awards, and been named RIBA South East Building of the Year.