Multidisciplinary collective Studio ThusThat explored the "invisible" material of copper as a low-carbon alternative to concrete when developing its This is Copper furniture collection.

Made using waste taken from copper recycler Metallo in Belgium, This is Copper comprises a series of objects including chairs, lamps and mirrors.

Each piece aims to demonstrate the potential of copper waste as a more sustainable alternative to cement, the production of which accounts for around eight per cent of global CO2 emissions per year.

They focused on one particular waste called slag, which is the leftover impurities of the copper smelting process.

They used two forms of slag: sand and powder. In its raw form, slag looks "just like sparkly black sand".

It is poured in a molten state – which the designers describe as "man-made lava" – into water where it cools rapidly to form a black, glassy stone before shattering into small glassy pieces. It is then piled up in large, black mounds. 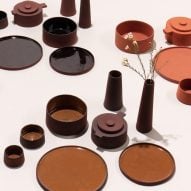 Due to the high temperature of the refining process, the slag is primed at a molecular level in such a way that it can be crushed into a powder and activated by an alkali.

This causes the chain reaction of internal bonds to form – resulting in a geopolymer. This means the slag can be used as both a binder and an aggregate by combining its powder and raw coarser forms.

"It replaces the need for cement entirely," said the designers.

The slag geopolymer does not release CO2 in its formation, nor does it use much water, resulting in a carbon footprint that is around 77 per cent smaller than standard cement.

It also boasts a high resistance to heat and shock, corrosion and acid, as well as a high compressive strength and better durability than cement.

Working alongside the researchers of KU Leuven, the team explored how far they could push the material by using various techniques to reap different effects and end results.

They wanted to explore the material in its raw state when making the Sparkly Black chair, which was cast directly into a pile of coarse copper slag – similar to the traditional sand-casting process.

The Cobbed Chair, on the other hand, was made by shaping the mortar paste over a form by hand. As a result, it boasts a more organic, irregular form.

For the more refined, blocky Molten Chair, the designers joined slabs of copper together directly with molten copper – this thermal shock process would normally not be possible with Portland cement.

When starting the project, the RCA graduates asked themselves "what exactly is copper?".

"The metal we know is only part of a much wider material story," said the designers. "Mining overburden, tailings, metal concentrates, rare metals like gold and silver, sulfuric acid, sulphate solution, slag, and more."

"All of this is copper, or in other words is a direct result of processing, using, and recycling copper," they continued.

"This project exposes and proposes potential uses for these overlooked byproducts as we continue to search for new ore streams."

Studio ThusThat, who are based in London and Amsterdam, were featured as the first designer in the VDF studio profiles series.

In the profile the designers explained how they hope their project will help to tell a more complete account of the primary metal.

"Studio ThusThat aims to overturn how we understand our material world by uncovering their hidden backstories, digging into their origins, and exploring that which was left behind as waste," they explained.

"Copper is ubiquitous to our modern world, yet it is largely invisible," the designers added. "It is the oldest metal mined by humankind, with ancient uses dating back 8,000 years. The metal was historically used for its malleability and antimicrobial properties (indeed, even against viruses)."

"Today, it is crucial for a renewable future: a wind turbine alone can contain up to five tonnes of copper, and 10 tonnes of the metal are needed per kilometre of high-speed railway."

Studio ThusThat previously worked with the waste taken from aluminium production, recycling toxic red mud residue into a series of earthy tableware objects for their From Wasteland to Living Room project.