As part of today's collaboration with CAMP, VDF is showing this lecture where Danish architecture studio Cobe explains how it helped make Copenhagen one of the most liveable cities in the world.

Cobe, which was founded in 2006, primarily works in three fields: urbanism, architecture and public space, the studio's project director Thomas Krarup explained in this talk from CAMP in May 2018.

"We don't work like normal architects – drawing up plans which others execute – we use Lego as a metaphor to for our collective approach to creating architecture, working with landscape architects, urbanists, constructing architects, architects and also with clients and stakeholders in the neighbourhoods we build in," Krarup said.

The studio has six principles that it applies to its work, including: "From infrastructure to public space."

Its 2018 book Our Urban Living Room tried to explain how Copenhagen went from a poor city on the verge of bankruptcy, to top the lists of the most liveable cities in the world.

Cobe works extensively in Copenhagen and recently redesigned the Nørreport station, the most congested place in the city, using the way people moved in the urban area to guide its design.

"Walking patterns in the snow were profound to learn from in our approach – we tried to map how people used the space, this gave us an insight on how to reconfigure the space," Krarup explained.

"A series of islands popped up, which could be used for buildings and bicycle spots, as they wouldn't influence how people used the space." 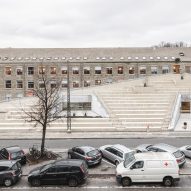 When the studio undertook the project of transforming a silo formerly used for grain storage into a residential space, it chose to keep the existing structure.

To Cobe it was a unique opportunity to make use of vertical space in the city.

"Eight metres tall spaces are something that a developer wouldn't ever let you build," Krarup said. "We wanted to make the floor level public and make the view from the top accessible to the people of CPH, which does not have many tall buildings overlooking the city."

Similarly, its design for the Danish rock museum in Roskilde was built on top of an old concrete factory.

Another of Cobe's principles is: Culture as a social engine, a motto that the studio tries to embody in its public projects.

"Something that we noticed in Copenhagen was how public buildings can bring people together in a city which is challenged by social segregation and gentrification," Krarup explained.

He quoted Winston Churchill to illustrate Cobe's motto of embracing the local community: "We shape buildings, thereafter they shape us." 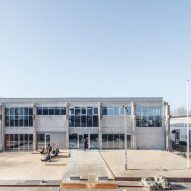 Krarup ended the talk by focusing on the studio's final principle, Copenhagen Tomorrow, which looks at how city planning should be conducted.

The studio won the competition to transform the city's North Harbour in 2008, and has created a phased masterplan for the project that will take 20-30 years to execute.

"We created a series of six principles to guide us through the very long planning process – the new development should consist of islands, should embrace its industrial harbour structure, the densest part must integrate as much green space as possible, everything should be accessible within a five-minute walking distance," Krarup said.

"The reason why we are very proud of the North Harbour is because we didn't only work on the large scale masterplan, but also designed the streetscapes and the pocket parks between the buildings. And we get to live in  a project that we designed," he added.

Photography is by CAMP.