"How can the built environment support, increase or play a role, at least, in the idea of the public sphere as one of playful interaction?" Interboro co-founder Tobias Armborst asked at his lecture for CAMP, Prague's centre for architecture and urban planning, in June 2019.

"That's something that's important to us," he added.

The studio, founded in the early 2000's, thinks of public space as a place of difference, not unity, where different cultural expressions and publics meet.

Its recent book The Arsenal of Exclusion and Inclusion deals with artefacts and policies that show divisions in the American landscape.

Armborst delved into the theme in his lecture, covering a number of tactics used by developers and residents to exclude neighbourhoods that differ in race and economic status from certain areas.

Planning in Detroit "a tool of exclusion"

An example is affluent Detroit suburb Grosse Point, which set up farmers markets on the streets connecting it to Detroit.

"Here is a tool of exclusion by two things that nobody could have anything against: pedestrianisation and 'Copenhageniziation,'" Armborst said.

"But the way it's used, and where it's used, turns it into a tool of exclusion, of denying access between the city and the suburb," he added.

As an example, Armborst points to a planning project it undertook in Detroit's Campau/Davison/Banglatown, which sought to reconnect a part of the city that was divided by racist planning policies in the past.

"There should be participation and it shouldn't be tokenism"

"There, our work is really to increase access," Armborst said. As part of the information-gathering process, the studio found new ways to reach out to residents who wouldn't usually attend a participatory meeting.

"We decided to use the tool of an ice cream truck, a very everyday piece of infrastructure in Detroit," he explained. "We appropriated one and turned it into an engagement tool that enabled us as outsiders to gain knowledge of the neighbourhood by talking to people." 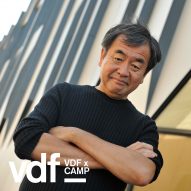 "When you're designing a public space there should be participation and it shouldn't be tokenism," Armstrong concluded.

"You should take the feedback you get along the way seriously and respond to it. It makes the design potentially better."

Photos are courtesy of CAMP.