Danish architecture studio Cobe has revealed its Uni3 design centre for Chinese car manufacturer Geely in Gothenburg, which will include a hidden laboratory for car brand Lynk & Co.

Designed with a eye on corporate espionage, Cobe describes the development centre for Geely as a "chamber of secrets".

Set to be built on the harbourside in the Swedish city of Gothenburg, the four-storey building for Chinese automaker Geely, which owns brands including Volvo and Lotus, will be used to develop the company's Lynk & Co cars.

Geely intends for Link & Co's cars to be available as part of a Netflix-style subscriptions service when they become available in Europe.

To keep the company's designs away from passersby, the 14,000-square-metre design centre is stacked vertically with the most public parts on the ground floor and the most sensitive areas at the top of the building.

"The building is design with a public ground floor and private areas on the top floors, only with access for Geely's personnel," explained Cobe founder Dan Stubbergaard.

"Here you also find the double-height 'chamber of secrets', where Geely's designers will have a spectacular and completely sealed-off innovations lab," he told Dezeen.

A showroom along with a reception area, meeting room and small presentation room will occupy the ground floor, with open-plan offices on the two floors above. The building will be topped with the secure, double-height innovations laboratory.

At the centre of this space will be an open courtyard that will allow designers to see how the cars look and function in daylight. This courtyard will have a glass floor and stand above an atrium in the floors below to  allow light into the offices.

The relationship between the public and private spaces is also reflected in the form and treatment of the facade with the black metal slats spaced closer together further up the design centre.

"The site is placed along Pumpgatan on the harbour front of Gothenburg with a stunning view of the water and inner city to the north-east," said Stubbergaard. 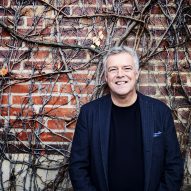 "Towards the harbour, the facade is pushed back to create an urban space in front of the building. The push-back also emphasises the entrance, and invites people in," he continued.

"The relationship between public and private areas are also reflected in the façade being open and transparent on the ground floor and gradually becoming more private towards the top of the building, as black metal slats on the glass facade are spaced closer and closer together."

Throughout the building Cobe hoped to reflect the design ethos of automaker Geely, which is China's fourth largest car manufacturer, and its brand Lynk & Co.

"We wanted to create a building for Geely that is deeply rooted in the identity and philosophy of their car design, based around the themes of 'personal', 'new tech', 'dark', 'urbanism' and 'respect'," explained Stubbergaard.

"It was important for Geely, that the building had an urban expression, since the Lynk & Co brand is rooted in the south-east Asian mega cities," he continued.

"The exterior is inspired by the outer materials of a car and its surroundings. By using glass and metal in the facade and concrete on the ground, the design centre relates to the cars that are designed inside the building and the streets they are going to conquer."