Front Page Tech, a YouTube channel hosted by Jon Prosser, reported that the product will be called Apple Glass and retail for $499 (£408) plus the price of the wearer's prescription.

Prosser illustrated this news with a mocked-up logo of a white pair of glasses on a black background next to the Apple logo and the word "glass".

Speculation about the makers of the iPhone releasing an augmented reality (AR) headset have been circulating for years, with Prosser describing the technology as Apple's "most mysterious product ever".

Prosser has also claimed that Apple "shadow-banned" him by blocking his podcast Recycle Bin from the iTunes charts without telling him, in retaliation for leaking the news. 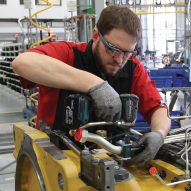 Google Glass resurrected as a tool for hands-on workers

Apple has undertaken several high profile AR projects recently. In June 2017 the technology company partnered with furniture brand IKEA to announce an AR-based shopping app that allows users to see how items would look in their house before ordering them.

In July 2019, Apple collaborated with the New Museum to release an iPhone app that would let people use their smartphone cameras to see virtual art installations in specific locations of cities around the world.

Rival technology company Google released its glasses-style AR headset in 2014. Called Google Glass, the product retailed at £1,500 and was designed to clip onto glasses frames, sold separately by Google.

Google Glass was pulled from sale in 2017 and the company redeveloped the project, pivoting to targeting the AR headset for businesses. Now called the Glass Enterprise Edition, it is aimed at giving assembly line workers hands-free access to their device.

AR uses technology to overlay digital elements with the physical world. Danish-Icelandic artist Olafur Eliasson has used AR to make an app that lets users interact with rare things from the natural world, such as puffins, from inside their homes.

Designer and programmer Cyril Diagne has created AR Copy Paste, an app that lets people take a photo of something on their phone and immediately drop it into their desktop as a cut-out image.

Main image is a stock photo by Pixabay.