Japanese digital consultancy Gluon is combining data from laser scanning with 20,000 photographs to create an augmented reality model of the Nakagin Capsule Tower in Tokyo, which is currently being demolished.

Named the 3D Digital Archive Project, the team aims to use digital technology to create an extremely accurate virtual model of the metabolist residential block designed by Kisho Kurokawa.

"We are using 3D data to save the famous Nakagin Capsule Tower, which is being demolished in 2022, as a culturally-valuable memory," said Gluon.

"We aim to accurately record its complex shapes with 3D measurement technology and pass on the value of the architecture designed by Kisho Kurokawa to future generations."

The iconic 1970s housing block in the Ginza neighbourhood of Tokyo is one of the most significant works of metabolist architecture – a post-war architectural movement that began in the 1960s.

It is currently being demolished after falling into disrepair.

As part of the project, Gluon has laser-scanned the entire building and is combining this data with more than 20,000 photographs taken at the site and by drones to create the model.

The group hopes to preserve an accurate digital version of the building's exterior and interior as well as the numerous modifications that were made by its residents. 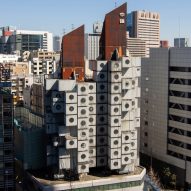 "In this project, we aim to utilize the 3D measurement technology that we have cultivated in the digital description of space so far, and to construct a new preservation method as a digital archive and to inherit the value of famous architecture," said Gluon.

"In addition to three-dimensional records of complex shapes and structures that cannot be recorded by flat photographs and drawings alone, the trajectory of modifications made by residents as they live with their ingenuity and the appearance of the building as it has changed over time are recorded as they are, thereby accurately grasping the architectural shape and leaving it as a digital archive for posterity."

After the project is complete, Gluon will upload the 3D point cloud data to a website as an open-source resource that will be available for free. An augmented reality (AR) model will also be made available for smartphones.

The team is collaborating with the Nakagin Capsule Tower Building A606 Project and other groups as part of the wider efforts to preserve elements of the building.

The Nakagin Capsule Tower A606 Project is restoring the capsule numbered A606. It aims to turn the capsule into a "mobile capsule".

The Nakagin Capsule Tower housing was designed by Kurokawa, who pioneered Japan's metabolist movement along with Kiyonori Kikutake and Fumihiko Maki.

The movement championed buildings that were adaptable and replaceable and each of the building's living pods, which measure 2.5 metres by four metres, were designed to be replaced every 25 years.

However, this never happened and the building became dilapidated, with demolition announced in 2021 and starting in 2022.