Unveiled last week, the RayNeo X2 smart glasses use AR to overlay a wearer's field of vision with different types of digital information.

As well as accessing navigation and translation tools, they allow you to receive call and message alerts, take photos or play music using a heads-up digital interface, rather than a device screen.

The glasses work by projecting a micro-LED display in front of both eyes. The display technology is embedded in the frames rather than the lenses, so those with limited vision can add their own prescription lenses without impacting the functionality.

TCL claims that, unlike other AR glasses, they are "the world's first" to feature a binocular, full-colour micro-LED optical-waveguide display.

This display features high levels of contrast and brightness, so is visible both indoors and outdoors, and is positioned close to centre to avoid excessive eye movement or eye strain.

"The technology RayNeo has developed will set the bar for future innovations in wearable AR, as there is no compromise in top technology, style or ease of use."

The glasses feature chunky black frames, with the camera slotted into the bridge, and a microphone and speakers embedded within the stems.

Each of the interactive features has been designed to offer an experience that wouldn't be possible with a smartwatch or smartphone.

The translation tool can interpret multiple languages in real-time and display the translated text as subtitles.

The GPS navigation system works by combining simultaneous localisation and mapping (SLAM) – the same tool used by autonomous vehicles – with gesture recognition. As well as giving directions, it can also highlight notable landmarks and recommended locations. 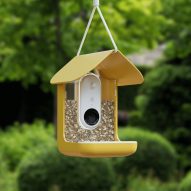 Music playback integrates a "whisper mode" that minimises sound leakage, so you can enjoy private listening without wearing headphones.

Meanwhile, the hands-free camera makes it possible to capture photo and video content at eye-level view, with features including image stabilisation to reduce blurring and an automatic night mode.

TCL is inviting developers to design other features, to expand the functionality further.

"With the rollout of TCL RayNeo X2, we seek to build a vibrant, comprehensive AR ecosystem to provide our users with rich content and compelling services," said Li.

"Those would include a series of original AR games developed by our team."

The product was eventually taken off the market following issues with the design functionality and battery life, and a public backlash that saw one wearer physically attacked.

While brands have been cautious of repeating the same mistake, advances in AR technology mean that smart glasses are again gaining popularity. Other recent launches include the Nreal Air and Viture One XR Glasses.

Unlike its competitors, TCL's AR glasses are equipped with Qualcomm Snapdragon XR2 chip, which allow them to connect with a smartphone.

The product is due to be available for developers in the spring, with the date of public release yet to be announced.

Other launches at this year's CES, the world's biggest tech event, include an accessible-for-all PlayStation controller and Sony's first car.