Canadian architecture studio Office Ou has surrounded a detached garage in Toronto with glass doors and windows to convert it into a multifunctional space.

The Garage Gem adjoins an existing house at the rear of a narrow laneway lot that backs up to a street.

It was converted from a traditional garage into a space that can be used for a variety of functions, including socialising, entertaining and working.

"This project stemmed from the desire to transform the traditional urban garage into a flexible amenity space," Office Ou said.

"The Garage Gem strikes a balance between precious and utilitarian to support a wide range of uses, it is a functioning garage, a conservatory, occasional workshop, a three-season space for entertaining guests, dining, writing, and simply enjoying the quiet seclusion of the leafy rear yard," it added.

Three faces of the detached unit are covered with glass doors fronted by black steel mullions, while the front is clad with cedar and features a rigid metal garage door.

Over time the cedar wood will weather and blend with the colour of the grey fencing that edges the property. Round light fixtures with swooping wires hang from the ceiling beams. 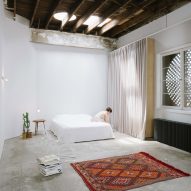 Inside, black-stained OSB sheathing covers the ceiling and parts of the walls and a series of exposed douglas fir wood rafters span across the length of the angular roof.

A large cedar shelving unit and cabinet extends the length of one wall. It is topped with a colourful terrazzo counter that matches the tiling used on the floor in the space.

The versatile room is designed to be used as both a car shelter or a simply furnished gathering space for hosting guests or working on projects.

As part of the renovation the studio created an outdoor kitchen between the garage and the brick house. Slate stones form pathways and small patios over the gravel ground of the outdoor area.

To tie the spaces together, the cedar cabinets and terrazzo counters used inside the garage are repeated on the cooking work surface.

Furnishings in the space include a round table and set of black chairs and circular light fixtures, similar to the ones hanging inside.

Office Ou is a Toronto architecture and landscape design office founded by Nicolas Koff, Uros Novakovic and Sebastian Bartnicki. Prior to founding the studio Koff designed a house in Hamilton, Ontario with straw-bale walls that reduce the property's energy consumption.

Other projects that have renovated garages into multifunctional spaces include, a brick outbuilding in Buffalo, New York reimagined as a house and office.

Photography is by Adrian Ozimek.