Architecture studio RicharDavidArchitekti has built a greenhouse on top of a single-storey family home within an orchard in the town of Chlum, Czech Republic.

Built in the Hořice district of Czech Republic, the aptly named House with a greenhouse consists of a single storey home with a roof-shaped greenhouse on top.

RicharDavidArchitekti placed the greenhouse on the roof of the house so that the home could enjoy 360-degree views of the surrounding orchard.

Its position also allows for the owners to reach it without going outside, meant separate foundations did not have to be constructed and that residue heat from the house could warm it.

The home and the greenhouse were designed to be two visually and structurally distinct elements. The single-storey home was built with masonry walls with concrete columns and clad in larch, while the greenhouse has a steel frame.

"Each of the two functions was designed in the simplest possible form and remained that way in implementation," said David Kazický, co-founder of RicharDavidArchitekti.

"We have never made a combination house and greenhouse. It has always been a standard greenhouse laid on a residential house," he told Dezeen.

The roof of the greenhouse is made from four-chamber hollow translucent polycarbonate and overhangs the house to shelter a terrace that runs around all sides of the home. 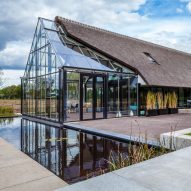 Maas Architecten merges a thatched cottage with a glass greenhouse

All of the home's rooms can be accessed from the terrace and this, not the greenhouse roof, is the most unusual element of the home, believes the architect.

"I think there are two things that make a house different," said Kazický. "The greenhouse on the roof is not a usual solution, but more important is the layout of the house, where residents enter individual rooms directly from the outside."

"This is definitely not typical in this part of the world. On the contrary in some Asian countries it is quite common," he continued.

At the centre of the home, which has interiors designed by Jana Medková and Hana Medková, is a large open-plan living and dining space, which can be accessed from the terrace on both sides of the house.

On one side of this central space is a bedroom suite, while a study and bathroom are located on the other side.

Kazický believes that although the home's arrangement is unusual, it follows principles used in many projects before.

"Of course the principle of a vertical mix of functions while maintaining functional forms is the principle used in many buildings, especially on a larger scale," he said.

"Here, of course, was a completely unique client who wanted a unique solution."

Other larger buildings to greenhouses include an office in Oberhausen, Germany and a Japanese restaurant in Denver, Colorado, which are both topped with greenhouses.

Photography is by Jiří Hroník.