London designer Adam Nathaniel Furman's Democratic Monument is a proposal for town halls around the UK that would feature bright tiles and a diverse mix of architectural styles.

As civic buildings, Democratic Monuments would be brightly-coloured combinations of styles and materials, reflecting the unique combinations of communities that make up different cities around the country.

The town hall would house offices, chambers for the local council, spaces for the mayor, libraries, galleries and halls for events and ceremonies.

Local soil, sand and stone could be incorporated into the building exterior by mixing it with the concrete to produce different colours that would act as a "vertical index" of the region.

"The idea is that the architecture acts as an armature, or a framework for the display of a multitude of different, locally representative artworks," Furman told Dezeen.

"It would ideally be a full gamut representing the different schools, or approaches to art in a given city at a given time – a visualised cross-section through the creative life of a city in built form."

Intricate murals executed in colourful tiles would cover the cathedral-style facade and interior spaces in an expression of what the designer calls "chromatic joy".

These decorative mosaics of ceramic tiles with digitally printed decals would be designed by local creatives.

Mixing together architectural styles in one stand-out building, suggests Furman, would be a much more accurate reflection of a city than a uniform appearance.

"In great contrast to the rest of our cultural output, our physical environment is crushingly uniform. Our cities are forced to become more and more like the architectural equivalent of those group photos of dignitaries at the EU where everyone is male, white, wearing a suit, and frankly, utterly miserable," said Furman.

"Architecture that can contain multitudes tries to turn this on its head, and literally turn the architectural object into a vehicle for the celebration of all of the contrasting and diverse tastes and cultures that exist at any one time in our cities."

Reflective, translucent or glittery finishes would make spaces glow under lights, and colourful marbles would be mixed with terrazzo and powder-coated steel surfaces.

Tiled plazas for public gatherings would surround the building, merging with the patterned alcoves and arches of its facades.

Although he created Democratic Monument three years ago, Furman believes the project's ideals are more pertinent than ever.

"In my eyes it's more and more relevant, especially with Covid-19," said the designer.

"I feel that the need for civic expression, communal pride embodied in actual physical places which celebrate not similarity, but togetherness in difference, would absolutely be fantastically important," he added,

"Power is so centralised now, we feel so distant from it, there are no places where we feel decisions are actually made near us, that relate to our lives, that we can actually go to to protest, to celebrate, to cry."

Furman created Democratic Monument for the New Typologies exhibition at the Architecture Fringe 2017, which was curated by architects Lee Ivett and Andy Summers.

The curators commissioned Furman to explore what a contemporary town hall with an expressive facade could look like. 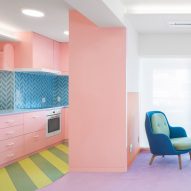 "I, of course, got so terribly excited, with a huge amount of pent-up frustrated creative energy unleashed on the project," said Furman.

"The design of monumental and symbolically meaningful public spaces and buildings is real passion of mine, and the fact that the Architecture Fringe properly funds those commissions, I could spend a good amount of time immersed in its design."

Furman has previously campaigned against poorly paid or otherwise exploitative commissions and work placements in the design community.

A big part of the Democratic Monument project was a 1:100 scale model that was produced by Furman's sponsor, specialists Lee 3D, using 3D-printed plaster.

Furman and Lee 3D worked together again in 2019 to produce colourful totems that were used in an animation for ITV. Earlier this year the designer brought his signature style to a maternity centre, which he enlivened with bright mosaics.

In conversation with Dezeen founder and editor-in-chief Marcus Fairs for Virtual Design Festival, Furman described his aesthetic as part of a vanguard movement he calls New London Fabulous, which rejects minimalism in favour of colourful and expressive design.

Video music is by Vikrant Tike.