An editorial project by London's V&A Museum reflects on objects that have been ascribed new meanings and functions during the coronavirus pandemic. Curator Brendan Cormier selects his highlights.

Pandemic Objects is an online editorial project that was launched at the beginning of May, composed of a series of articles posted on the V&A Blog written by curators and directors alike from the museum.

The project shows how items already in the museum's collection that can now be seen in a new way. Its editors have also selected a series of everyday objects, such as flour and yeast or nitrile gloves, that have now been placed in the spotlight under the new context of Covid-19

"During times of pandemic, a host of everyday often-overlooked 'objects' (in the widest possible sense of the term) are suddenly charged with new urgency," reads the V&A Blog. 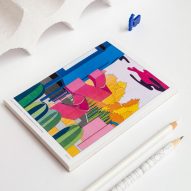 Architecture, design and engineering activities for children in lockdown

Toilet paper, for example, has become "a symbol of public panic", while parks have become "contested public commodities".

In collating these objects and considering the changes in their purposes, the V&A's Pandemic Objects project aims to "paint a unique picture of the pandemic" and the importance of the objects associated with it.

Here, Cormier explains the reasoning behind five of the object choices:

"One of the things the pandemic has made us think a lot more about – and which is often hidden to us in our daily lives – is the network of supply chains that keep our economy functioning.

"Zofia Trafas White writes in one of our posts about the ubiquitous cardboard box, used to ship countless parcels and packages to our homes when we don't have the luxury of going to the high street.

"Cardboard has become an essential material for logistics, and one that might be in short supply in the near future because of a breakdown in manufacturing and recycling. Thinking more critically about cardboard will be important in the future.

"Trafas White references this chair in our collection, Splat, which was designed consciously as an object not meant to last – as all children eventually grow up – and as such made from cardboard so that it can be recycled after use."

"In a piece I wrote about the vast proliferation of homemade signs over the course of the lock-down, I was struck by the power of individual voices finding expression out on the street in the form of simple paper messages.

"It recalled, in part, the early work the American artist Jenny Holzer's where she would bill-post acerbic and poetic statements through offset lithography in public spaces around New York City.

"As well, it's a reminder that the street is a perfectly effective forum for expression, one that has been slightly forgotten as we have all moved our socialising habits online."

"Although a lot of our focus has been on how new technologies will rise to the challenges brought on by the pandemic, one object that went into production more than 150 years ago, has proven especially effective: the sewing machine."

"In a post by Becky Knott [on the V&A Blog], she explores how different support networks have emerged like For the Love of Scrubs and Scrub Hub, in which people are encouraged to dust off their sewing machine to produce essential apparel and protective personal equipment (PPE) for hospital workers."

"To manage the crisis, we've seen governments and industry have to tackle the major logistical challenge of suddenly having to supply lots of urgent equipment, whether that be PPE or ventilators, in a very short period of time.

"Livia Turnbull, who wrote a piece for us on home-made masks, makes the useful comparison to a moment in Britain during thee second world war, when the government declared that every man, woman and child were to have a gas mask in order to protect against possible chemical attacks. Then, as now, industry was forced to rapidly retool in order to supply the millions of masks needed."

Air Routes of the World (Night) by Langlands and Bell (2001)

"In a piece by Ella Kilgallon, she explores the alternatives to travelling when we are all stuck at home. While referencing Google Street View as an unexpected new form of escapism, she also usefully points out to a longer history of travelogues and the depiction of voyages in literature and visual culture.

"This print is a vivid portrayal of what has been dramatically halted – air travel. The print redraws the world through the lens of travel routes that have become increasingly strained over the past decades."

More from the V&A Museum