Spanish architecture practice Studio Wet has built a linear house behind a ceramic brick facade and under a single mono-pitched roof in the village of Alosno.

Named Casa Borrero, the house occupies the entirety of its 40-metre-long – but only seven-metre-wide – plot. The home's singular form was a direct response to this site.

"The commission was to design a 'traditional' house with tiles on the roof, an initial statement that we understood as a contemporary home through traditional techniques," he told Dezeen.

"Nevertheless this intentional 'misunderstanding' took in account our client's wish to develop all spaces in a one floor."

Studio Wet reorientated the home to make the long facade the home's front, while the short facade, where the front door of the house that was formerly on the plot was located, is now a garage.

"Traditional plots in Alosno are like this, a short main facade but a deep plot," explained Gómez Mora.

"In this case the house lies on a corner, which is an advantage, and allows us to turn the tide, transferring the main facade from the short length to the long side of 40 metres," continued Gómez Mora.

"We are always willing to be involved in such projects, where the site is not a tabula rasa, and have some sort of singularity. Even though we are far from having a moralistic approach to the genius loci, it definitely makes our job much easier."

Within the house all of the home's rooms are arranged linearly. The front door opens onto a large patio, which divides the garage from the house's living spaces.

Alongside this patio is the kitchen and dining and seating area, with four bedrooms aligned along the house's main facade.

"Control of the direct sun light, crossed ventilation through wisely located patios and well dimensioned windows are the most important points to have a good shelter in Andalucía," said Gómez Mora.

"We have placed the rooms along the facade, but still kept the day spaces into the intimacy of the big central patio, which works also as a buffer space for the garage."

The house is clad with ceramic bricks, with a combination of flat and curved bricks used across the main facade to create a series of bays and improve the flow of this 40 metre-long stretch of brickwork.

Studio Wet chose bricks as an alternative to the village's standard white-washed facades, but one that also ties into the area's history.

"There is an obvious cliche on Andalusian villages to be whitewashed-walled towns. And it is a partially true story," explained Gómez Mora. 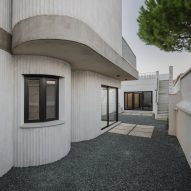 "But it is not less true, that there have been houses with exposed bricks, influence of the Victorian architecture brought by the Rio Tinto Mining Company to the area, or houses with just tiles facades in close relation only 50 kilometres away in Portugal," he continued.

"The ceramic bricks link the building with that history, but they also give us a chance to be more consistent on our own approach to architecture and construction."

The home is topped with a single mono-pitched roof, broken only by the curved patios. Studio Wet hope this form will demonstrate that the project is complete and unite it as a whole.

"We are often involved on a discussion on how a building reach its summit," said Gómez Mora.

"Somehow the building must show up that it is completed, that it can not stand any additional stacking of floors, and the pitched roof is an univocal answer to this."

"The intended unity of the whole building works smoothly, as a big part of the programme could have been arranged in a fragmented way without compromising the functionality of the home."

Throughout the project Studio Wet aimed to create a clearly arranged house that had an unified design vision.

"One of our design goals was to promote a unified perception for the bulk of the house," explained Gómez Mora.

"The same unifying intention moved us to rhythmically shape the outer face with curves, in a way to hold better, aesthetically and statically, the big pitched roof," he continued.

"We would also say that its clearness lays on a strong coherence between the building technics, urban response, client's wishes and our own creative agenda as architects. All those elements were taken equally and unavoidably."

Studio Wet is an architecture and landscape architecture studio run by Gómez Mora and Daniel Montes, which is based in Seville, Spain.

The studio previously added a curved extension with ribbed details to 1950s house in Seville.